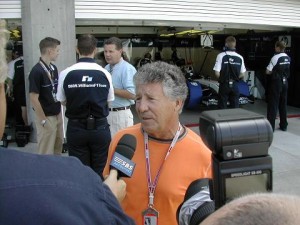 So it’s only a blog. Big deal if it was left in the lurch or not recognized as a bona fide media outlet by the PR person in charge. Makes no difference that the outlet has a super-charged Technorati Authority ranking of 2842, (e.g., #285 out of 100 million+ blogs):

“‘Well, these people are journalists,’ she said patronizingly (apparently she didn’t see the three separate media badges hanging around our necks). ‘It’s better for him to talk to a group of people rather than only being able to spend time with them one by one.’ Better for whom? All the while, the grumblings amongst the Mario fans were getting louder.”

This is the recount from Gawker Media’s turbo-powered Jalopnik blog for motorheads, I mean automotive enthusiasts. Apparently, a group of journos were baited for a spin around the Las Vegas Motor Speedway with legendary Mario Andretti, then switched due to poor PR planning. The result was this headline: “Mario Andretti and a PR Flim-Flam at Las Vegas Motor Speedway.”

“After more than 20 minutes of listening to others’ idle chit-chat (and no driving), we got up the gumption to ask Mr. Andretti if he was going to drive us around the race track, to which he shrugged his shoulders and replied, ‘I do what they tell me to do.’

In the end, the writer wryly noted:

“We still admire and venerate Mario Andretti. But his PR people, at least this time, ended up doing more harm than good. But, oh – they made sure each one of us got a press kit before we left. “