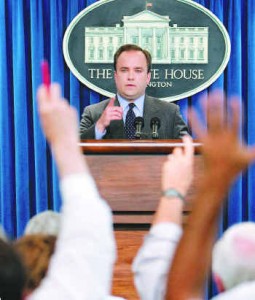 I wonder what Michael Wolff is thinking at this moment? Do you think the pugnacious media pundit and Vanity Fair contributor’s ego is sufficiently sizable to take credit for Scott McClellan’s resignation today?

After all, his eviscerating profile of the 30-something White House spokesman from Texas certainly wasn’t what Mr. McClellan’s communications colleagues had in mind when they proposed the feature story.

What’s clear is that the relentless criticism from the White House press corps and many others, didn’t bolster Mr. McClellan’s career. After all, you have to co-exist with, and be trusted by reporters to have any hope of delivering a credible assessment of your boss’s take on current affairs.

Mr. McClellan was caught between a rock and a hard place. He had two masters – Mr. Rove and the press gaggle — neither of whom he appears to have mastered. Now I guess he’ll follow in Ari’s footsteps to capitalize with a book and a lucrative presence on the lecture circuit. PRSA, you listening? Scott, my advice, head back to the ranch for a spell.