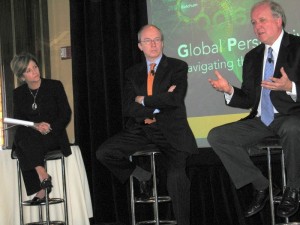 I’m such a luddite sometimes. I had the great fortune to swing by the Rainbow Room atop 30 Rock early this morning to catch Ketchum’s “Global Perspectives Series: Navigating the 2006 Mid-Term Election.”

Featured on a most provocative and plugged-in political panel (pictured at left) were former New York Congresswoman and Ketchum DC’s top PA person Susan Molinari, the Wall Street Journal’s Alan Murray, and the omnipresent Mike McCurry who yesterday sat opposite Nicolle Wallace on the set of CBS “Evening News” with Katie Couric for a rather civilized interview…at least compared to the histrionics we’re used to seeing on the cable nets. He and Ms. Wallace will join Ms. Couric on Election Night.

I was so excited to have my digital recorder with me, since I planned to grab Mr. McCurry for a few minutes following the panel discussion, and then stream the audio on this very blog. I’ve chatted with Mike over the years, and it was great having him in New York at this most propitious time in the political discourse.

The event ended and Mike, as expected, was most accommodating. I asked him about new versus traditional PR; How the Democrats fared versus the Republicans in terms of using new media; Why the Dems just can’t seem to deliver consistent and strong messaging (given all the good material this Administration serves up), etc. We spoke for about five minutes.

When I returned to my office, the tape was empty. Geesh. What a dolt! Suffice to say, Mike was at the top of his game, articulate, and very much immersed in the social media tools that allow candidates (or companies) to pinpoint their messages to the exact audience in a most fragmented media environment.

Was it blog relations or the creation of optimized (Google-findable) content that enabled such precise targeting? Both, he said, but don’t forsake the traditional tools, e.g., ed. board meetings, etc., nor advertising. In fact, he said it’s all of these delivery mechanisms in combination that provide the most effective means for winning converts. Also don’t forget about constituency building. Could it be that integrated communications, (e.g., the whole egg approach) is finally living up to its promise?

Other sound bites from the morning:

— Ms. Molinari derided Nancy Pelosi as someone who would find it difficult to build consensus across party lines.

— Mr. McCurry told the audience that he and his colleagues in Boston on that fateful night in 2004 were so convinced of the outcome, they directed Sen. Kerry to his suite at 7pm to write his victory speech.

— Mr. McCurry said that he is standing ready to go to work for Hillary should she decide to run and tap his expertise.

— Mr. McCurry predicted a Democratic win in the House and the defeat of Rick Santorum.

— When asked what this President should be doing (or should have done 2, 4, 6 years ago), Mr. McCurry said that Mr. Bush should have replaced Don Rumsfeld with James Baker and Dick Cheney with Condi Rice! But it’ll never happen since “he’s pig-headed.” His words. Not mine.