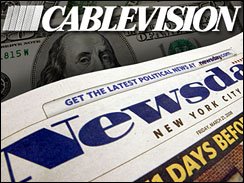 I’ve known Cablevision head of corp. comms. Charlie Schueler for many years, having worked on his business from time to time. The New York Observer, in its inimitable way, painted him in a rather negative light yesterday.

In essence, the snarky pink newspaper accused Mr. Schueler of preventing Newsday from doing its job, which, in the Observer’s opinion, amounted to ambushing the newspaper’s new owners at their homes. Schueler was angry (and rightfully so, in my opinion).

But to many on the Newsday staff, the attempt by the paper to introduce itself to the Dolans the best way it knows how was pretty roundly rebuffed, and that didnâ€™t look good.

Mr. Schueler, on the other hand, offered this reasonable explanation:

â€œI did call the reporter and reminded him as I would any press outlet that it is the companyâ€™s practice that if you would like to speak to the Dolans or any other executive, you call the communications department, and we will be happy to arrange it if itâ€™s possible,â€ Mr. Schueler said. â€œFrom time to time, I have had to make that call to News 12, the Post, The Times and others. It has nothing to do with Newsday â€” itâ€™s the practice of the company and the same rules apply to everyone.â€

Personally, I think Charlie is on the right side of this argument. Did Newsday‘s business staff make any attempt to go through channels to land the interview? Was the trespass option its first for gaining access?

On the other hand, one woulda thunk that the paper’s new owners would have offered Newsday‘s business section first dibs on a meet and greet. They didn’t, and there’s the rub as articulated by Newsday blogger John Riley:

â€œSome newspapers have a vision of changing the world and making it a better place,â€ he wrote. â€œBut it seems the Cablevision vision is Cablevision. Jim Dolan, who apparently couldnâ€™t find the time to talk to Newsday, is quoted in todayâ€™s Newsday story from an interview with Channel 12, which he also owns.â€

Having handled PR chores for Mort Zuckerman’s acquisition of the New York Daily News some years ago, I have distinct memories of Mort doing the right thing when it came to building bridges with the news staff. Lessons learned.