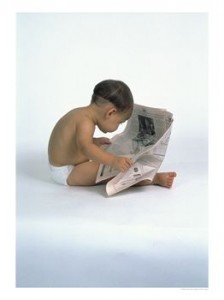 Over the long unusually mild weekend here in New York, I came across Jarvis’s point to Michael Hirschorn’s astute musings in which the storied Atlantic Monthly writer outlines his digital strategy for the nation’s ailing newspapers, with a particular focus on the paper-of record. He made some blogworthy points, including this one:

“And while itâ€™s true that fewer and fewer people are purchasing newspapers, itâ€™s also almost certainly true that more and more people are reading news. This thanks to portals, newspaper Web sites, search engines, syndication feeds, and millions of blogsâ€”a goodly percentage built on the hard labor of professional journalists, whose work the bloggers link to, praise, mock, and recombine with the hard labor of other professional journalists.”

Hirschorn advocates building social media-driven franchises of followers around the erudite and eloquent journalists who presently populate the dead-bark medium:

“That, Iâ€™d venture, is how you start rethinking the newspaper business. Not only do you allow your reporters to blog; you make them the hubs of their own social networks, the maestros of their own wikis, the masters of their own many-to-many realms. To take but one example, Kelefa Sanneh is the pop-music critic for The New York Times. He is very likely the best music critic in the country, and certainly the best new Times music writer in years. Letâ€™s say that Sanneh creates his own community around the music he likes.”

“Go even further: incentivize the critics and reporters by allowing them to profit based on the popularity of their sites; make it worth their while to stick around.”

Mr. Hirschorn concludes that newspapers and other print media can still be relevant to many:

“Online news, microchunked, consumed on the fly, is fast food; the newspaper, fed by its newly invigorated journalist-brands, is the sit-down meal.”

One such sit-down meal was served yesterday in Richard Siklos’s Sunday New York Times piece on the comings and goings of today’s digital media gurus and pundits. The reporter ponders the question: Do any of them really have what it takes to tame the digital future?”