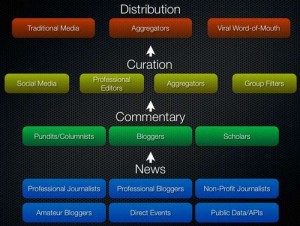 Steven B. Johnson’s take on what the news ecosystem will look like.
Should every company have a blog, a Twitter feed, a Facebook page, a YouTube account…? And if not, why not? Are certain industries more social media-ready than others? And will every industry eventually spawn a rich and diverse news/info ecosystem comparable to those that fuel today’s technology, political and media industry sectors?

My #2 son recently shared (via his del.icio.us account) Steven B. Johnson’s take on the “future of news.” In the piece, which was first delivered as a speech at the SxSW Interactive Conference this past spring, the brilliant and prolific technology scholar and author (five books and the recent TIME cover on Twitter) cogently described the evolution of technology media, and more recently political media, as paradigms for how other media sectors may ultimately develop.

In “Old Growth Media And The Future Of News” Mr. Johnson writes:

“I think the political web covering the 2008 campaign was so rich for precisely the same reasons that the technology web is so rich: because itâ€™s old-growth media. The first wave of blogs were tech-focused, and then for whatever reason, they turned to politics next. And so Web 2.0-style political coverage has had a decade to mature into its current state.

Whatâ€™s happened with technology and politics is happening elsewhere too, just on a different timetable. Sports, business, reviews of movies, books, restaurants â€“ all the staples of the old newspaper format are proliferating online. There are more perspectives; there is more depth and more surface now. And thatâ€™s the new growth. Itâ€™s only started maturing.”

It may be a leap of faith, but returning to the opening questions of this post, I wonder if an industry’s degree of “new growth media,” as Mr. Johnson terms it, is a reliable barometer of whether that industry is ripe to capitalize on social media’s tools and channels. For example, would you, as PR consigliere, advise your accounting or insurance client to rush wholeheartedly into social media? Are their respective industries’ media ecosystems sufficiently evolved? Will they ever be?

A quick assessment of the tech, political, media…sports, entertainment and food sectors quickly reveals media-rich environments with passionately engaged and broadband-connected audiences. It’s no coincidence that these sectors have more than their fair share of social media programming successes.

So when a client asks you about his company’s appropriateness to engage the social media graph, perhaps you should first examine where his industry sits on the “new growth media” continuum. It’s probably not sufficient to only gauge whether a company’s corporate culture will allow such a shift, but whether the industry’s media ecosystem will accommodate it.

Simply put, not all industries are ready for the full social media monty, though all would no doubt benefit (and learn) by first tipping their toes in the water. (Hint: start by listening.)