In spite of its recent misstep regarding its flawed reporting on Benghazi, CBS News’s venerable “60 Minutes” continues to have the capacity to drive the national conversation. And, sure enough, last night my tech-centric Twitterstream suddenly was consumed by drones — and not the killing kind – following the prolific Charlie Rose’s Cyber Monday-pegged segment featuring Amazon’s Jeff Bezos.

Mr. Bezos, who’s giving Marissa Mayer’s PR department a run for its money, decided to offer “60 Minutes” the “exclusive, first look” at what’s on the horizon at the Seattle-based uber-retailer. “60 Minutes,” in return, obliged Amazon’s PR department by teasing the “big surprise” in the days leading up to Sunday night’s airing.

The public reaction, and subsequent coverage was fast and furious.

The segment conjured memories of another visionary whose vehicular invention also had the potential to change the world. (No. Not Elon Musk.) It was late 2001, and the tech world was all abuzz over a book proposal that referenced renowned engineer Dean Kamen’s latest invention, code named “Ginger.” Only a handful of the tech industry’s movers & shakers, including Steve Jobs and Jeff Bezos, were treated to a sneak peek of Mr. Kamen’s vision, and all were sworn to secrecy.

The noise surrounding Mr. Kamen’s mystery invention was deafening…and this before Twitter twinkled in the eyes of Ev, Biz and Jack. I remember mentioning the Ginger fury in my weekly staff meeting and specifically saying what a cool client Mr. Kamen, and his much talked about mystery invention would make. 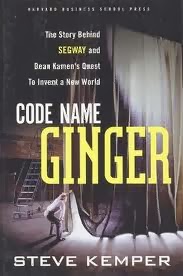 Later that day, Harold Burson summoned me to his office to ask if I can help advise an old friend of his on an issue involving a recently taped profile of his friend on “60 Minutes.” Mr. Burson’s friend was Dean Kamen. It seems that “60 Minutes” had just finished shooting its piece, pegged to another invention of Mr. Kamen’s — a wheelchair that could climb stairs — and the engineer’s work encouraging young inventors.

Given the noise surrounding “Ginger,” the program came back to Mr. Kamen with a request to update the segment to include details about Ginger (whose launch was still in the planning stages). I advised against sitting back down with “60 Minutes,” given the preliminary nature of the invention’s launch. Nonetheless, the inventor went ahead with the interview, though the exact nature of his invention remained a secret…if my memory serves me well.

Shortly thereafter, a few of us were en route from LGA to DEKA in Manchester, NH to meet Ginger first-hand. We didn’t have a clue of what to expect, but soon found ourselves standing on a prototype Segway, which was then called a “Flywheel,” on a small test track. The technology was not only way cool, i.e., just lean forward to advance the human transporter, but the potential impact this machine could make — especially on the environment — was revolutionary.

Price per unit aside, we soon were briefed on the many local and state-level regulatory hurdles that needed to be cleared in order for the Segway to achieve mass public adoption. Apparently, one couldn’t just ride a Segway on the sidewalks of most municipalities. There was much advance work that needed to be done.

At this point, I got pulled onto other clients, but was asked to draft a comprehensive launch proposal. In it, I strongly recommended to the account team that Mr. Kamen first build a groundswell of support for the Segway from the international scientific and environmental media communities before taking it to the public. That didn’t happen.

The Segway soon made its public debut with Mr. Kamen himself riding the machine onto the set of ABC-TV’s “Good Morning America.”  It was a fabulous segment that made a big splash at the time, but frankly didn’t have the capacity to sustain this wonderful invention for the ages.

In watching Jeff Bezos both proudly unveil his vision for a drone-based product delivery system, and also touch upon the regulatory hurdles such a system would face before being allowed to deploy, I thought about the GMA segment with Dean Kamen.

Will the “60 Minutes” exposure and subsequent scuttlebutt backfire in Amazon’s efforts to secure the requisite regulatory (FAA) clearances it will need to publicly deploy? Has Amazon put the cart before the horse? Only time will tell.