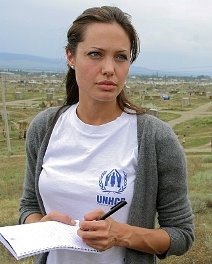 Not to obsess or anything, but when I first signed on to Blogger, I filled out one of this blogging platform’s canned profile questionnaires, which included the following:

Question: “You’ve written a hit musical! How will you avoid having fame go to your head?”

Answer: “Avail yourself to no media interviews! Let your body of work speak for itself. Delay succumbing to the allure of fleeting fame.”

Last night, I came across Business Week’s prognostigator for all things media Jon Fine’s analysis of how to build a celebrity reputation and the media’s role therein. He was especially enamored with Angelina Jolie whom he refers to as the “Media Master Manipulator” for her prowess in playing “The Game:”

“Unlike virtually all other celebrities, Jolie does not employ a publicist and in the past year has kept press interviews to a minimum. (She declined to comment for this column.) But the story she presents needs little augmentation.”

How could this be? No publicist? Few interviews? (well, except for the multi-parter with CNN’s Anderson Cooper). Mr. Fine postulates that by putting her philanthropic endeavors (and high-profile marriage) above all else, Ms. Jolie has succeeded in elevating her reputation into the stratosphere (and clearly out of the Hollywood bubblehead mode on which Paris and friends have the lock anyway.

“Paris Hilton got famous by keenly understanding and playing to what tabloids want, but Jolie did something more rare by using them as a springboard to reshape an image. (And, of course, expose fans to causes bigger than herself.) She did this by knowing what makes a celebrity story.”

Again, the road to redeeming fame is much harder to attain than the one to fleeting fame. It has something to do with the importance of being earnest.