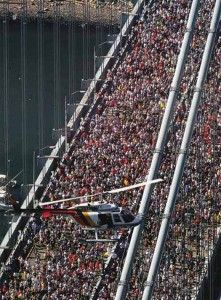 The spectacle of tens of thousands of runners gathering in the pre-dawn hours atop one of the world’s longest span bridges is enough to garner global headlines year after year. With that inherently newsworthy setting, corporate America set about the task of leveraging the New York City Marathon for its products, services and hospitality opportunities. Think…ING.

I remember one year our client, a famous carpet brand, cut a swatch of a deal with the Marathon organizers, New York Road Runners Club, wherein the company received permission to bathe the medal grates of the 59th Street Bridge with a long red carpet (giving new meaning to the word “runner”). It was laid in the race where the runners first arrived on the island of Manhattan.

How fortuitous for me since my apartment had floor-to-ceiling windows directly opposite the spot where the bridge flowed onto First Avenue. In fact, our annual marathon party had front row seats to the spectacle. Peter Mehlman, an old friend who was a writer for Howard Cosell’s radio show, and who later went on to write and produce episodes for Seinfeld, showed up one year. I was reminded of this when one Seinfeld episode depicted a marathon party overlooking the bridge. Coincidence?

Anyway, I digress. The point of this item lies in the challenge PR folks face in maintaining media relevance for these perennial news events. I mean parading the elephants through the Midtown Tunnel year after year to promote the Barnum & Bailey circus, while effective, is getting a little tired…as are the pachydermic PR ploys. Events like the Grammy’s, Oscars and Emmys have sufficient people power to draw the media gaggle so for them it’s more an issue of managing the message than creating one.

Adding a face-recognizable celebrity to the mix — especially one of the A-list variety — always freshens the media outlook. This is especially true if the face in question is out of his or her element. Today we learn that cycling god Lance Armstrong will run in the NYC Marathon! Need I say more, Diddy?