Nowhere was the wall between editorial and ad sales as high nor as impenetrable than at mainstream news organizations.

Who can forget the maelstrom that erupted in 1999 when one esteemed journalistic enterprise the Los Angeles Times blurred those lines by publishing a 168-page special Sunday magazine issue devoted exclusively to the cityâ€™s new sports arena, the Staples Center? It was an ad-brokered deal.

The Times‘s respected media critic at the time David Shaw recounted the ethical breech (and the newsroom turmoil it caused) in a 30,000-word critique titled “Crossing the Line.” Many other media pundits echoed Shaw’s distaste for this egregious church-meets-state no-no.

My how things have changed! In an era when display and classified ad revenue at nearly every paper-driven media organization has fallen off the fiscal cliff, and the CPMs at Web-based media have failed to quickly fill the void, publishers have resorted to new and creative ways to blur the lines between advertising and editorial to enhance “ad” revenue.  (Shaw, who passed away in 2005, would likely not be pleased.)

Dena Levitz, in a just-posted PBS MediaShift piece titled “How News Orgs Break Down the Editorial-Business Wall, Ethically,” cites an Adweek piece in which Atlantic Media president Justin Smith, an old friend, explains the company’s turnaround. He said he wanted to make The Atlantic a place where the traditional wall between editorial and business could be broken down, but “in a way that would encourage innovation, not stifle journalistic independence.”

The Atlantic’s Smith is hardly alone in his thinking. Nearly two years ago, this blog looked at the innovative ad-editorial model Huffington Post had ushered in, recalling Mobil’s former corp comms chief Herb Schmertz and the paid advertorials he pioneered on the op-ed page of The New York Times.

Who benefits from the slow dismantling of the ad-edit wall? Brand marketers and issues advocates, that’s who. Communications professionals now find themselves in an era that has spawned new avenues for having their clients’ branded content and POVs surface in established news outlets — a kind of hybrid approach that defies easy classification into one of legs of the new media paradigm of paid, earned and owned.

For example, when your client CEO pens a by-liner and you convince an editor at Forbes, Advertising Age, Media Post, Mashable or any number of these newly unshackled publications of the editorial merit of his or her POV, the resulting piece is a hybrid of earned and owned. (You own the content, but have earned its publication from the editorial gatekeeper.)

Similarly, when one purchases a “sponsored post” on BuzzFeed, promotes a Tweet, or amplifies a story on Facebook, it’s a hybrid between paid and owned. (You created the “editorial” content, but paid for its appearance in an outlet or on a social channel’s news stream or wall.  Facebook stories often originate from third-party “fans,” but in effect are still manipulated by the brand.

I even noticed this #eBayFinders-sponsored post on ReadWriteWeb (re-branded recently to ReadWrite). What’s more, the influential tech site promoted a link to the piece to its 1.2M+ followers on Twitter. 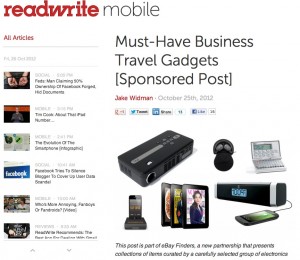 As more and more media bend their once-indelible editorial policies to allow for revenue-generating sponsored or third-party content, many companies in the communications space have taken note.

On a panel I recently moderated at the PRSA International Conference, Ketchum CEO Rob Flaherty acknowledged that his firm has a media “buying” unit focused on the growing opportunities in this area. While a company called ShareThrough promotes its ability to produce and place branded video content on websites – news and otherwise.

Net net: today there are many (new) windows and doors into a media outlet’s news hole. Paid, earned and owned are only part of the story.