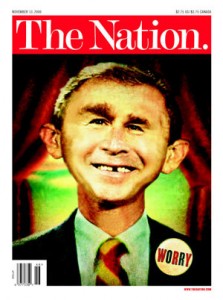 As we enter a new year, full of hope and expectation, let’s not forget just how precarious our world has become over the last six years. Global warming aside (New York’s Central Park just recorded its first December without any snow since 1877), several significant and scary scenarios have come and gone in recent weeks — two over the holiday weekend alone. All were given short or no shrift by this administration.

Plenty has been written about Mr. Bush’s direct slap in the face to the bi-partisan recommendations posed by James Baker & company. The President will soon announce plans to increase the number of Americans fighting in Iraq. Could a new year and a state funeral really make us forget just how much hubris this President has?

The administration’s reaction? Nil. Mr. Bush was “asleep” at his ranch in Crawford, TX and simply not available for comment. Huh?! It was 9pm in Crawford when the noose let loose. Mr. Blair was silent as well. As the PR world moves toward transparency, this administration continues to trade on opaqueness and obfuscation.

Finally, just in time to ring in the new year, we learn that the 3000th American was killed in Iraq. Mr. Bush’s reaction? Zippo. After all, why should he add fuel to the sad reality he has created, and give his lamentable legacy longer legs.

Yes, I know. It’s a new day and a new year that will restore our nation’s venerable system of checks and balances. Even so, we cannot be lulled into complacency, nor put our eggs in a Democratic Congress’s straw basket. We still very much live in dangerous times.