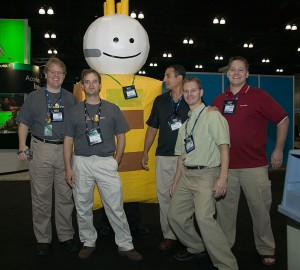 In a newly surfaced post by Joe Wilcox in eWeek’s Microsoft Watch, we’re treated to a pretty good look at how Microsoft PR has evolved.

In it, the writer attempts to get his arms around the Redmond company’s migration from the mode of traditional message manager (through the filter of the trades) to an approach that allows the thousands of company-sanctioned blogs to serve as the de facto corporate channel for disseminating news.

“It’s quite common now for Microsoft to make major product announcements via blogs, and it’s not uncommon for the posts to be the only communication–no press release. With close to 5,000 employee bloggers, I’d argue that blogs are now Microsoft’s major communications vehicle for reaching pretty much everybody.”

As admirable as that may sound — and few will dispute Scoble and his band of Channel 9’ers positive impact on Microsoft’s public image — this reporter contends that the employee-created news is not all what it appears to be:

“Employees are certainly a group over which Microsoft can exact some control and that can spin information to the company’s advantage. Many of the employee blogs are PR. They are Microsoft spin.”

“Microsoft provided three paragraphs of comments for our follow-up story on the Windows Update controversy. The comments appeared almost word-for-word in Clinton’s post; we received those comments before the blog posted.”

Personally, I think it’s pretty amazing that Microsoft has empowered some 5000 bloggers to talk about their work and their employer, and even to occasionally break news. I also don’t question the company’s efforts to protect its interests by weighing in — either via traditional channels, or subtly and sometimes overtly through its empowered workforce.

But Mr. Wilcox also is not off-base when he insinuates that the company’s blogger output reflects the corporate position more than the casual reader is led to believe. Let’s call a spade a spade.