What better way to lead into a post on my adventures at this year’s Business Insider Ignition: Future of Digital conference than with a Bloomberg News story suggesting that BI’s new Berlin-based owners, Axel Springer, is considering putting the digitally native news site behind a paywall. It’s part of a larger push by the German newspaper publisher to re-invent itself through U.S. investments in digital media:

Given Business Insider’s tech-centric beginnings as Silicon Alley Insider, the event also featured a strong dose of media and tech disrupting companies like Maker Studios, Niche, Vine, Glide, Jet, Blue Apron, Kik, Vimeo, BroadbandTV, Vevo, and naturally execs/pundits waxing on the empires that hold the fates of many of these startups in their hands, e.g., Facebook, Twitter, Apple, Google and Microsoft. 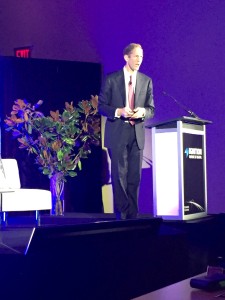 Like previous years, Business Insider co-founder/publisher Henry Blodget open with an overview of the changing media landscape, culling data from eMarketer and his own research team. Here are handful of the factoids Mr. Blodget cited that resonated enough for me to tweet in real-time and paraphrase below. Audio of his overview here (RT: 19:23):

I will be back with more highlights from the conference in subsequent posts.