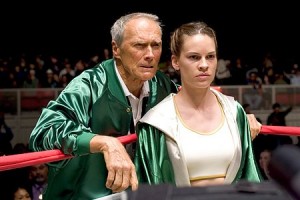 It was fun seeing Ellen doing some man-on-the-aisle (versus MOS) interviews last night during the Oscar telecast. She handed a screenplay to eventual Oscar-winning director Marty and posed for a close-up with Clint after giving her digital camera to Steven Spielberg.

She even had the temerity — and good comic timing — to ask the world’s most celebrated filmmaker to re-do the shot so that she and Clint were centered in the frame. Too funny…especially since it seemed ad-libbed.

Seeing Clint there last night and contemplating today’s top celeb story, my thoughts turned to the closing scenes of his film “Million Dollar Baby.” You remember. A battered and paralyzed Hilary Swank (Best Actress 2005) lay in a hospital bed when her trailer-trash mother popped in from her trip to Disneyland. The mother, accompanied by her lawyer, arrived not to console her dying daughter, but rather to make her sign a legal document forcing a hand-over of her assets.

In an eerie kind of way, life imitates art with the legal motion filed today by Anna Nicole Smith’s mother to overturn wacko Seidlin’s ruling in order to allow her estranged daughter’s body to be buried near her home in Texas. Could Virgie Arthur’s version of Graceland be far behind? Is it money or the lure of perpetual fame that drives her?