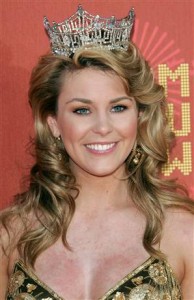 We’re all familiar with Chris Hansen’s (literally) captivating series on “Dateline NBC” in which the peacock network teams with a group called Perverted Justice (only in America, folks) to lure pedophiliac pervs into the glare of news camera lights. The folks at Fox apparently loved the show so much that they tasked their own veteran vigilante to copy it.

John Walsh of “America’s Most Wanted” is pulling a Chris Hansen in an Internet sting operation airing Saturday night. Hey, if the fair and balanced network can rip off the high-minded cultural offering of swapping wives, why can’t they also swap out a luscious lure for the long arm of the law to catch a pedophile?

Only Fox — not known for understatement — wasn’t satisfied with some no name producer posing as a teen. It chose instead to hire none other than the current Miss America to chat online with the pervs and then beckon them inside the booby-trapped home from the front stoop! How anyone could mistake Miss America for a 14-year-old, I don’t know, but it makes for good ratings (and bored bloggers like this one to take notice).

Now this is a win-win-win situation, but first let me digress. I handled, along with John Healy, PR for the 75th Anniversary of the Miss America Organization (remember the year the organizers held a live vote to decide on whether to stage the bathing suit contest?) . Our charge was to enhance relevancy for the venerable beauty (and yes, college scholarship) pageant, and by so doing, build TV viewership. (It worked.)

Along comes thrice-married Donald Trump. (No, not to the Miss America-baited home.) The Donald decided to get in the beauty game — as if he wasn’t already — and purchased Miss America’s arch rival — the more downscale Miss USA pageant. Soon thereafter, the Miss America organization shuttered its longtime roost in Trump-infused Atlantic City, lost its TV deal, and was scratching its coiffed head on how best to revive its anachronistic brand in the digital age.

So back to the win-win-win…and win. Miss America gets an Internet-related shot in the arm, an AP story, and some decent national TV exposure. John Walsh takes Dateline’s concept to an absurd new level, and hopefully bigger ratings. And, the pervs in Suffolk County, New York get stung and put away…all for the perverse enjoyment of the home viewer.

BTW– in other related Miss America news, 82-year-old Venus Ramey of Waynesburg, KY, the 1944 Miss America, this week pulled her own sting. She foiled a robbery by shooting out the thieves’ tires and holding the perps at gunpoint until the cops arrived. Talk about a variation on a theme!