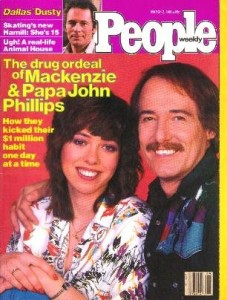 Maybe it was a Monday. Who can remember? But here I was sitting quietly in my cubicle some two-and-a-half years into my first job in PR. I worked for a small, but highly influential entertainment boutique in midtown Manhattan.

That morning, I answered the office door and in walked a lanky guy with a mustache who asked to see my boss. I escorted him back to Bobby’s office, and returned to my cube.

About 15 minutes later, Bobby called me in and introduced me to John Phillips…yes, that John Phillips. Apparently, Mr. Phillips was in desperate straits. A jail cell seemed a lot closer than California Dreamin’ at this stage of his life. He was busted for cocaine possession and on the verge of going before a judge who would decide his fate.

He explained that he and his daughter Mackenzie have been active in a rather progressive drug treatment program out of Fair Oaks Hospital in New Jersey. If my memory serves me well, it was Dr. Mark Gold and his novel use of the drug Clonidine to ween addicts off of cocaine on whose wagon the Phillips hitched.

Apparently, John was a model patient who took a leadership role in the program. He hoped this positive “positioning” would weigh heavily on the judge’s fateful decision.

My boss asked if I could help garner some media attention for John’s “work” with Dr. Gold…on a pro bono basis. I accepted the assignment (as if I had a choice). Still, it was a pretty good story, as I soon learned. People magazine quickly committed to a cover, followed by appearances on “The Today Show” and elsewhere. Dr. Gold was an integral part of the interviews, and thus benefited professionally as well.

When Phillips finally went to court, the judge cited his good work at Fair Oaks and gave him a suspended sentence. Phillips called me to say he owes it all to me. Had I known what a twisted soul he really was, I would have thought twice about helping him. In fact, based on his daughter’s revelations to Oprah today, both of them were apparently in on the ruse.