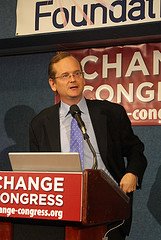 This blog over the last three years has spent a fair share of time looking at politics through the focused lens of a PR practitioner. After all, hasn’t this administration provided enough taint on our profession to merit such attention?

Some of my previous political posts included:

But this post concerns a project to which I gladly lent a professional hand these last couple of weeks. In a National Press Club speech yesterday, sponsored by the Sunlight Foundation, Stanford Law professor Lawrence Lessig announced that he and political strategist Joe Trippi have teamed up to form an organization called Change Congress for the purpose of fighting the corruptive influence of money on Congress.

In a kind of Google mash-up, but for politics, Prof. Lessig hopes to use technology and wiki-tools to engage and connect people with the many organizations already working in this area. The organization will also keep tabs on which candidates and Congressman have embraced such reforms, and which have not.

His speech, which runs about 40 minutes followed by Q&A, is a must view. For inspiration, take a watch here…then get involved. Please Digg it here. More about yesterday’s speech: