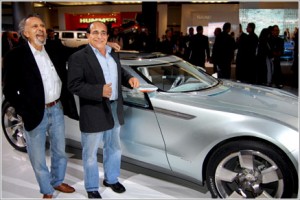 Talking cars. My new car has a six-month trial subscription to Sirius. On long drives – like those visiting the boys at college – we usually scan the dial and almost invariably end up on NPR Now. Of all the shows on that most civilized network, I gotta say that it’s Tom and Ray whom we find the most entertaining.

Who? The Magliozzi brothers of Bahston (pictured). You know, “Car Talk!” These guys are authentic and naturally hilarious with impeccable timing. They also have a syndicated newspaper column, which brings me to the subject of today’s post.

The column tomorrow (Friday) in the Seattle PI advises a woman who wrote them to rant about her 2004 Toyota Sienna minivan — the one on which both sliding doors literally “fell off,” i.e., became completely unhinged within a month of one another. Toyota customer service refused to cover the repairs (except for parts).

In their column titled “Car Talk: A little publicity just might get Toyota to fix Sienna doors,” the twin-turboed talkers advised their new pen pal as follows:

Tom: Well, I’d suggest you write to a couple of newspaper columnists and see if you can get them to print your letter, Kate.

Ray: Yeah. I can’t imagine that Toyota would want to squander its worldwide reputation for quality over a couple of underdesigned door hinges. I mean, do you think Toyota wants the word out that its doors are falling off after 28,000 miles?

And you know what, Kate? I’ll do my Jarvis-like part by posting on your delinquent door dilemma, but take it one step further. On Monday, I’m moderating a panel with Bruce Ertmann, Corporate Manager, Consumer Generated Media, Toyota Motor Sales, U.S.A. Inc. He’s skedded to present:

“Harnessing the Power of User Generated Media at Toyota Motor Company,” a case study on the “…lessons learned about how one of the largest automobile manufacturers in the world embraces consumer generated media as an important part of its overall branding and communications strategy.”

I think I’ll mention your predicament (and Tom & Ray’s column on it). Come to think of it, if he’s doing his job, he’ll likely see this RSS-fueled post even before we have a chance to meet. I’ll even add a tag for Toyota Sienna to make it easier to find.