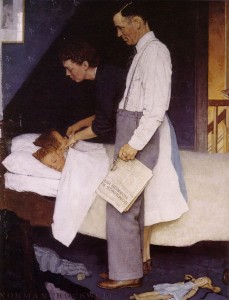 We had a small dinner party over the weekend. Now mind you, my suburban friends are more fixated on kids and community than anything else. And when I say community, I don’t mean the wisdom of the crowds or Facebook variety. I’m talking the neighbors we run into in town or on the sidelines of school sporting events. It’s an existence as far away from Silicon Valley or Alley as you can imagine.

Anyway, the dinner topic turned to the rash of robberies in our relatively affluent town. Simply everyone knew of someone who’d been hit in the last six months. Yet, the local weekly paper’s “police blotter” listed only a couple of car break-ins and one notorious act of graffiti to satisfy the salacious appetites of the paper’s readers: every household in town.

Not a single robbery was reported. Nonetheless, anecdotally we agreed that a massive crime spree has beset our beloved town. We also concluded that the county police department, among the highest paid in the nation, is totally lame. Not a single collar has been made.

As I put on my new media hat, I realized that no mechanism or channel existed to capture this collective and community-crucial information so that it could manifest publicly. The police department certainly isn’t about to publicize its abject futility.

I came to the disheartening realization that in spite of the revolution that envelopes me in my professional life, my homies have yet to and may never embrace the transforming technologies that serve to enlighten, inform and create connections. Furthermore, I bet that my hometown community more accurately reflects how life’s lived in most towns across America.

Still, as I ponder how the Brian Leher Show tapped its community of listeners, and some 30,000 responded by providing local prices of supermarket staples, I can’t help but dream of the possibilities.