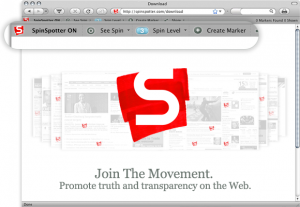 This just in from the folks at TechCrunch: the Republican National Committee has named a “Director of New Media.” He’s former Microsoft and MSN employee Todd Herman who posted on his new role here. (RNC’s former top techie resigned earlier this month.)

Well, I’m not surprised the red-staters moved quickly to fill that vacant slot. Haven’t they promised for months about finding some of that “je ne sais quoi” made so de rigeur by the Obama-ites during the ’08 campaign? Well, now they have someone with real tech cred, albeit working for the party (deservedly) out of favor.

, a startup that provides tools to detect spin in news stories.”

SpinSpotter…Republicans…hmmmm. Why does this sound like a such a contradiction in terms? I guess if the blue-blooded media watchdog group Fairness & Accuracy in Reporting (FAIR) can flourish, so can the two its red-blooded cousins Accuracy in Media and the consumer-driven SpinSpotter. But then again Herman is not so easily defined.

“…his political affiliation leaned conservative and heâ€™s also made political contributions to the Electronic Freedom Foundation, Swift Boat Veterans for Truth and the American Center for Law and Justice.”

Money for EFF and Swift Boat Veterans out of the same checking account? Go figure.