This wrenching news just in: a startup called YourMechanic has won the much-hyped TechCrunch Disrupt startup showcase in San Francisco this week. The problem it solves: “getting your car fixed or serviced without having to leave home.” Geesh. The new techonomy is even sticking it to the local auto repair shop! Frankly, this doesn’t bother me given my painful personal experiences with car mechanics.

As my Twitterstream filled with breathless reports from TC Disrupt, not the least of which was Mark Zuckerberg’s first public appearance since getting married…oops, I mean Facebook’s calamitous IPO and the subsequent death spiral of its stock price, I welcomed a return to the cocoon of New York’s buoyant tech scene and specifically, the September New York Tech Meetup. It was a good one.

No crowd-sourced auto repair solutions here. (Must be a California thing.) Rather, the sold-out audience of 800+/- at NYU’s Skirball Auditorium, plus a couple hundred more watching the live video stream from New Work City (courtesy of new NYTM sponsor: Major League Baseball Advanced Media), and scores more at Foursquare’s New York headquarters, witnessed an eclectic mix of entrepreneurs, each with 3-5 minutes to win the hearts and minds of this most discerning audience of New York’s tech cognoscenti. And they didn’t fail to please. 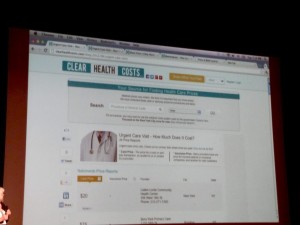 Like the myriad showcase/demo events that abound, tech entrepreneurs identify a shared problem and deploy their coding and social media acumen to try to resolve it. One of the evening’s early presenters was Jeanne Pinder who spent more than a decade covering healthcare for The New York Times. Unlike her former Times colleague Steve Labaton who took his buyout and joined “the dark side,” Ms. Pinder took her buyout and joined the light side.

Specifically, she created a company aptly called ClearHealthCosts.com, which uses crowd-sourcing and other techniques to shine light on the shadowy world of health care provider costs. The disparity in prices for medical procedures and prescription drugs from one provider to the next astounded the audience. $1200 for a drug prescription versus $2.50, $400 for an MRI versus $2300…you get the scandalous picture. It was a noble and important undertaking succinctly presented with a quiet confidence by Ms. Pinder. 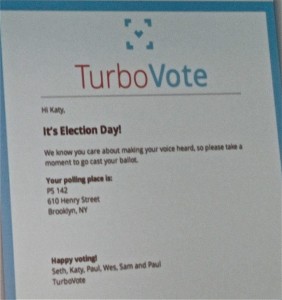 Along a similar vein (forgive), we heard Katy Peters present TurboVote, which pushes electronically or via snail mail up-to-date who, what, where and when for exercising your most important civic duty. While the free (or postage only) service will not neutralize the GOP’s insidious efforts to disenfranchise millions of Democratic-leaning voters in this country, it will let you know what form of ID you will need to cast your vote.

As the election approaches, I was also glad to see other tech-driven apps and initiatives to spur wider voter participation or cut through the candidates’ specious advertising claims. If the FTC can regulate dubious consumer product advertising, why can’t it do the same for uber-dubious political advertising? And what happened to the TV industry’s standards & practices departments? But I digress.

No Tech Meetup would be complete without some novel new approaches to better organizing one’s work or private life. There were several that struck a resonant chord with this PR person/blogger/Dad/husband (but not in that order). Brewster (love the unorthodox name) seeks to organize your disparate address books and social contacts into a single, searchable and visual database via an intuitive interface on your iPhone (iOS-only for now).

The startup was founded by Steve Greenwood whom I met in Dumbo eons ago when his last company Drop.io sought to reinvent how newsmakers presented their media assets for public and journalist consumption. That company was purchased in 2010 by Facebook.  The Times’s Jenna Wortham recently noted: Steve is betting “that the average person is juggling at least a thousand contacts and could use a little help.” You bet.

I also enjoyed hearing Matt Hall take the audience through the underlying premise of Docracy, which has open-sourced the challenge small businesses and entrepreneurs face in obtaining quality legal documents. (He noted that the current online offerings for such legal documents and those hawking them suck.) He showed how Docracy allows for collaboration between an employer and prospective employee in the case of a job offer letter. In a follow-up conversation, Matt assured me that the documents themselves will remain free, and that Docracy will provide premium tools to enhance the user’s experience with the service.

Not unrelated was a company called CM.PLY, which offers “social media disclosure” that companies can readily deploy when mounting sweepstakes, promotions and other public-facing endeavors that require legally vetted language.  And for the email set, a company called Movable Ink demo’d one of its apps that lets you grab rich media content from anywhere on the web, convert it to HTML and insert it effortlessly into the body of an email.  Very cool.

Two of the more buzzworthy startups were VoiceBunny and Condition One. VoiceBunny is a platform that uses crowdsourcing and an algorithm to help anyone find just the right person to record and deliver a voice-over.  Just put out the request to VoiceBunny’s community of John Cameron Swayzes and within 30 seconds you have a professional voice-over…at a tiny fraction of the professional cost.

VoiceBunny was mildly reminiscent of Project Noah (August NYTM), a tool to explore and document wildlife and a platform to harness the power of citizen scientists everywhere. Anyone can geo-post a sighting in nature, and within a few minutes, the global community would identify it.

The evening ended with a demo I’ve seen before as a judge in another mini-showcase co-sponsored by NYTM. It was for Condition One, which call itself “the next generation of powerful, immersive video experiences.” Hyperbolic? Hardly, judging from the reaction of the crowd. I grabbed some video:

Oh, and btw, the inimitable Mark Cuban also thinks Condition One is the future of video. He put a half mill into the company. Good enough for me.