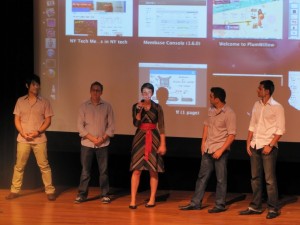 Few can dispute the vitality and promise of New York’s tech community after attending one of the monthly New York Tech Meet-up events. The energy was palpable among the sold-out audience of 850+ who nabbed a coveted ticket to visit NYU’s Skirball Center Tuesday evening to hopefully catch an early glimpse of the next Twitter or FourSquare. They were not disappointed.

I remember the first time I attended a New York Tech Meet-up – both as a presenter and an observer of the city’s aspiring digital start-ups. It was April 2009, and I had the good fortune of crossing online paths with Charlie O’Donnell who was interested in the new PR search engine I helped develop. Three days later I found myself on the stage of FIT’s Haft Auditorium staring out at an audience of 600 (mostly) young men whose hearts and minds my co-developer and I needed to capture.

Back then, the event had a more of a Hell’s Kitchen feel to it, with the moderator doing his best to emulate Gordon Ramsay. (I exaggerate.) There were a couple of presenters who were literally told to go back to the drawing board. Tough crowd – these New Yorkers. Fortunately, our search app was well received — maybe because it did what it said it would within the allotted time.

In comparison, this past Tuesday moderator Nate Westheimer handled his duties with aplomb and compassion. When one presenter lost her Internet connect midstream, Nate assuaged the terror she no doubt was feeling with a few reassuring words and an extension of her time on stage. I suppose he also could have reminded her of how Steve Jobs lost his Internet connect during the first public demo of the iPhone4.

Much of the growth of New York’s tech community has to do with the commitment the city’s universities, and by extension its graduates, have made to exploring and expanding digital’s impact on society. Considerable credit also must go the Bloomberg Administration, which had the foresight to support and bolster New York’s vibrant tech community all along the way.

At this week’s meet-up, Robert Steel, the city’s new Deputy Mayor for Economic Development (and the only one in the house wearing a suit and tie), took the podium to kick-off the second year of NYC BigApps2.0 whereby the city will reward $20,000 to “the developers of the most creative, best implemented, and impactful applications for delivering information from the City of New York’s NYC.gov Data Mine to interested users.”

As for the applications and social media-fueled services presented Tuesday evening, there were several that struck a resonant chord with this PR blogger. The first was Introspectr, a search engine, which “makes it easy to find messages, documents, and links from every part of your online life.” Guess what? It does. The engine indexes everything in one’s Facebook and Twitter streams, as well as one’s Gmail (attachments too) to allow those forgetful users among us to find even the most vague recollections from your digital travels.

I also liked Solvate, an on-demand sourcing solution for companies seeking qualified freelancers. It had kind of an elitist Doostang feel to it, i.e., no slouches need apply, but the site is clean and matching mechanism efficient. For the volunteers among us, the team at CatchaFire created a smart way to put one’s skills to work for good causes, and in so doing quantify the value of the work to the organization.

Finally, I have to give props to former Flatiron clients Elliot, Eli and Josh, tri-founders of Amie Street who I first met in the spring of their senior year at Brown. They had an idea for a music e-commerce site (groan), but exclusively for independent artists and with a novel sales model: the community determined the price of the tune, i.e., the song price rose based on popularity.

Last month Amie Street was acquired by Amazon, which shuttered the site, but allowed its founders to apply their considerable energy and talents to Songza, an easy way to create and share with friends your own Internet radio station. Did I hear Elliot say that Songza has 8Ì¶ Ì¶mÌ¶iÌ¶lÌ¶lÌ¶iÌ¶oÌ¶nÌ¶ Ì¶ 8.5 million songs in its database?