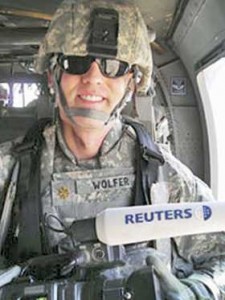 Presidential politics was on the menu at Michael’s (alongside the $34 cobb salad) during a recent gathering of our men’s lunch group of PRs, journos and one special guest, the head of a magazine publishing company.

The day’s topic explored the variables that might still make a measurable impact on the candidates’ respective fates. It included the choice of vice president, and questions of age, race, and public finance.

One factor that surfaced, which I believe has the greatest potential to influence the election, involves those well-funded (and unrestricted) third-party groups, which advocate/propagate for one candidate or the other. This phenomenon led to the adoption the term “swift-boat” as a verb.

Taking this theme to the extreme, Salon today reported on one such group called Vets for Freedom, which somehow secured the U.S. military’s support (and your tax dollars) to advance Senator McCain’s Presidential prospects. The mechanism involves a “journalist”-embedding scheme in Iraq, with one exception: the journalists are members of this group, which has:

“a remarkable number of ties — some previously unreported — to Republicans generally and John McCain’s campaign specifically. And it has run attack ads against Barack Obama.”

“But what about sending political activists and GOP operatives to Iraq in the guise of journalists, with the cooperation of the U.S. military and on the taxpayers’ dime, so that the activists can come home and proselytize for the Republican presidential candidate’s position on the war?”

Salon rightfully observes that this latest “campaign” to influence the court of public opinion — and ideally the election — appears to break new, and dangerous ground. What’s sobering is that it may just work.