Last week, we found ourselves at Twitter’s New York City offices for an event whose topic couldn’t have been more timelyÂ in light of the downing of Malaysia Flight 17 over eastern Ukraine the next day. We met for the monthlyÂ gathering of the Online News Association’s NYC chapter, a vibrant Meetup group with 1750 members all of whom seeking solace byÂ addressing the vexing challengesÂ journalists face in today’sÂ digitally and socially-infused information ecosystem. 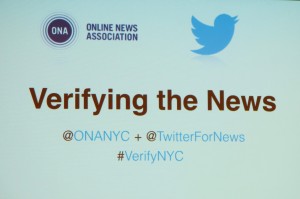 For this particular sold-out session, “Verifying the News,” 115 attendees paid $5 each to hear how a handful of reporters and editors digitally decipher what’s true and what’s not in the social spheres. The venueÂ made perfect sense given Twitter’s starringÂ role as a crowded playground from which journalists struggle to cull information in real-time to share, report and/or simply amplify as they deemÂ fit.

Twitter’s Head of News Vivian Schiller, my former New York Times client who subsequently held leadership positions at both NPR and NBC Universal, opened the session by describing the challenge for today’s journalists. She then outlined the event format wherein a handful of editors and reporters who have sourced news, verified or debunked the reports and crowd-sourced stories â€” all through social media â€” will share their stories in a series of lightning rounds. 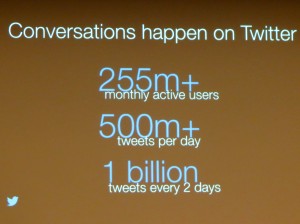 I use social media generally as a cheat sheet. There’s a lot of junk out there, a lot of false information. One airline CEO posted on his personal verified Twitter account that the [Malaysian] plane [that disappeared] landed safely in Indonesia, which was obviously not correct.

Following the right people. What I do is make sure that I know who I’m following. I have phone conversations with them to verify.

The biggest headache I would say I have as an airline reporter are flight delays and cancellations when we have to write a story and find someone who’s stranded at the airport. I sue my Hootsuite screens where I am looking at each of the airlines, and the people who are tweeting at them. I reach out to these people. They’re not looking for me,. I’m just trolling around out there. I find someone who’s pissed off at the airline. I have to to determine if these people are actually flying or are they making it up.

Finally, for a story I did on the grounding of Boeing’s Dreamliner, we ended up using about a dozen former Boeing engineers who had worked on the Dreamliner project. LinkedIn was the key here. I searched for “Boeing commercial airlines,” “787,” “in the past.” I ended up finding about 80 people who I contacted. About 30 of them got back to me…20 of which had good interviews about what they did…12 or 13 were used in the story. 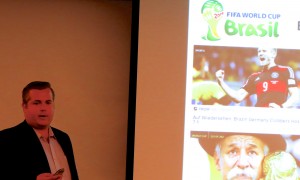 The issue I’m going to talk about revolves around images, and the verification thereof. This was a big game in which Brazil lost in the semi-finals 7-1, the worst lost in World Cup history. If you were watching, the conversation soon turned to “OMG what is going to happen in Brazil.”

The first thing we saw was a lot of images being tweeted around the country. This one was shared the most. When you dig a little deeper, we learned that the photo was not from 2014, but actually from 2013 when there were riots in Sao Paulo. How did we figure out the photo wasn’t real?

We had a few folks from Telemundo on the ground at the time who said “yeah we’re walking down that street right now and none of that is happening.”

The other thing we did was to look at the Twitter account from which the image was tweeted. It looked pretty real. But in looking at the Twitter bio info, the first word says that this is a “parody” account. Apparently, that wasn’t enough for many, 6000 of whom thought it was real news.

We wanted to take verification a step further, There’s a real awesome tool called Google Image Search. Any image you see on the Web – whether it’s on Twitter, a website, whatever — you can copy the URL of that image and put it into Google Image Search to see the past image history of that.

Finally, there’s an item called EXIF Data and a tool called EXIF Reader that will let you look at the history of an image and tell you whether an image has been altered.

I follow these folks because they ARE reliable. They aren’t just putting random chatter up. They know the terminology. Some are even yelling at each other. “Wait a second. This guy’s not dead. Let’s calm down.”

What’s really interesting and very different from a few years ago is that official accounts from the FDNY and NYPD know people are interested and want to know. Instead of saying we won’t talk about it until tomorrow morning, they’re putting out high-res images. They’re providing extra information about the firefighter. They’re giving more detail. Remember, it’s a holiday weekend at one in the morning. It’s a sea change.

There are a lot of official agencies and gov’t bodies that have pretty fast social media accounts. The State Department is one. It helps us do our jobs. Â We don’t want to be just an aggregation service. It [official social media feeds] helps us get to original documents.

This week when an SNL cast member tweeted that he was fired, we assumed he was an authority on himself and treated it like a news tip. It was the starting point, not the ending point. We made some calls.

We’ve actually started using Twitter as an image service instead of using random shots. We use embedded tweets that have photos in them from sources that we trust are OK to run with.

BeyoncÃ© is a show, NOT tell person. She will not tell you she is pregnant. Rather she will post a photo on Instagram.

Twitter’s Andrew Fitzgerald soon took the floor and wowed the audience with a fresh look at a Tweetdeck search. Â He cleverly used a few expletives as key words to illustrateÂ how people use Twitter when seeing something extraordinary happen. Â He also shared this:

“Tweetdeck is a tool that Twitter acquired mainly to help journalists.”

We also heard from David Clinch, executive editor ofÂ Storyful, which is now owned by NewsCorp. David talked about the “human algorithm” that StoryfulÂ uses to quickly verify video and theÂ person/people behind it. “We’re a paid service, but we’re also a news agency” in that we ultimately make the video available to news organizations. Â We also can predict which videos are about to go viral.

To end the evening, Twitter let it be known that for the last several months it has been working with a NYC-based company called Dataminr to make sense of the extraordinary amount of data that crosses its stream.

Ted Bailey, founder/CEO, DataminrÂ walked the audience through his service.

We have been working with Twitter for the last four months on a project we call “DataMinr for News.” Again, you have 500 million tweets sent around the world every single day. How do you find the tweets that you’re not expecting? Â  We think Dataminr is a very interesting tool for the news industry.

We were founded five years ago and have been in the news business for about a year. We started in the financial industry helping hedge funds andÂ banksÂ find actionable information as a trader across a sea of Twitter in real time, i.e., to make trades faster. Journalist were the most sophisticated across all these crowds. Â  We built tools that brought Twitter into the workflow of journalists – from detecting useful sources in real time to begin the verification process.

The audio of the full session (w/o Q&A) can be found here. Â Finally, here are some related stories around the growing issue of news verification: