A few years back at SXSW, the ubiquity of QR codes earned that promising AR-like technology the conference crown, in spite of its obvious flaws. The previous year, it was the geo-locating, Mayor-making check-in app FourSquare that emerged as the clear winner, especially for night crawlers and humble braggers.

Each had their proverbial 15 minutes of fame, though at the Web Summit this week in Dublin I did hear about an app that allowed one to mobile-scan any branded image (from any medium) for transport to the brand’s digital content. No reader required. FourSquare, on the other hand, has since pivoted to compete with Yelp, while spawning a gamified check-in clone called Swarm through which one can earn coins and a place on the leader board.

So who were the big winners in Dublin? I’d have to say that augmented/virtual reality (AR/VR) catalyzed the most conversations. No fewer than 22 gaming and VR startups showcased their wares. And few could miss Facebook’s futuristic booth housing Oculus. 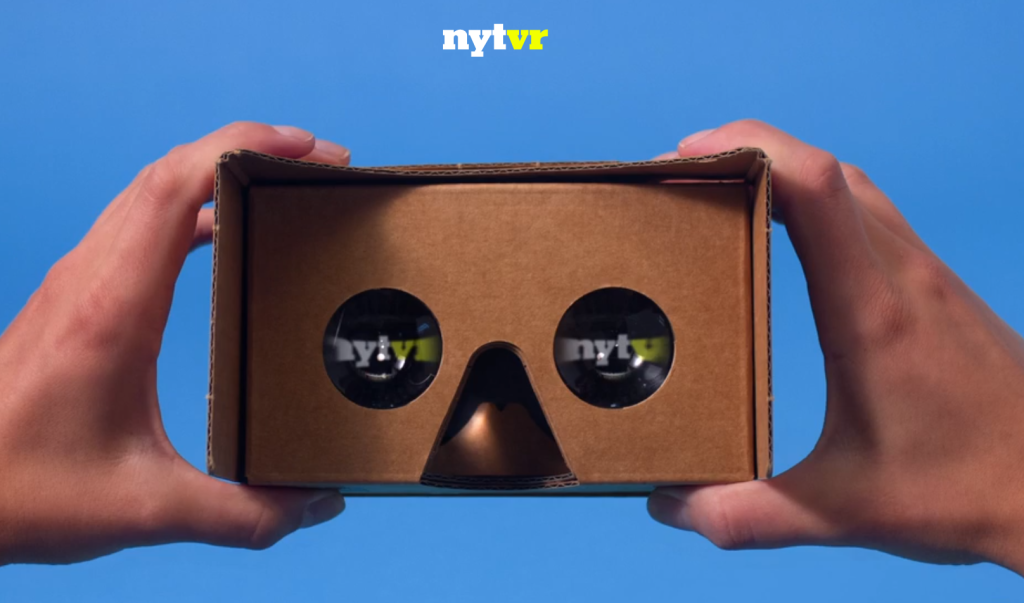 Jumping squarely on the VR bandwagon this week was none other than The New York Times. If you hadn’t heard, the former “Gray Lady,” a name derived from the color (or lack thereof) of its newsprint, just distributed one million Google Cardboard VR viewers to subscribers of its Sunday print edition. It coincided with the publication of a VR-enabled, multi-media story titled “The Displaced.”  As HuffPost’s Michael Calderone noted in his piece “New York Times Touts Virtual Reality As History-Making Journalistic Innovation:”

“The Times’ first VR film, “The Displaced,” may just live up to the hype…What VR offers is complete immersion in the children’s worlds, a 360-degree perspective that can’t be accessed through other mediums”

Whether it’s a gimmick or the future of news remains to be seen. I do know one thing. Mobile, social and enhanced content creation and display technologies have changed everything. To its credit, Web Summit’s organizers offered a separate “Content Stage” on which the media industry’s movers & shakers prognosticated on the disruptive forces rocking their world. I had a chance to talk with executives from a couple of the more digitally evolved brands.

Aron Pilhofer, executive editor of digital at The Guardian since September 2014, had spent the previous nine years steering The New York Times through the industry’s digital turbulence.

We talked about distributed content, especially via the social platforms, the threat (and huge valuations) of digitally native media, and of course, quality journalism and whether media fragmentation has diluted the influence of legacy news brands.

On the differences between The New York Times and The Guardian, he said they are “very much alike culturally,” in “their commitment to quality journalism, and international growth.” He did quip that “on the digital side, The Guadian may be a little ahead in some ways.”  On distributed content, he conceded that Apple, Facebook, Snapchat and others hold the cards in their dealings with news content providers. He also admitted that the huge valuations we’re seeing for digitally native sites are well deserved.

I then chatted with Stephen Hills, president and GM of The Washington Post, now owned by Amazon founder Jeff Bezos. Steve has lived through it all during his (soon-to-end) 28-year tenure at the news organization made famous by Bob Woodward and Carl Bernstein in “All the Presidents Men” — a book and film that singlehandedly filled desks at journalism schools everywhere.

He spoke admirably, and in fresh terms about The WashPost’s editor Marty Baron who made his career at The Boston Globe, which is featured in the acclaimed new film “Spotlight” about the church pedophile scandal in that town. It’s a film that very well may also inspire the next generation of journalists.

On distributed content, Steve said, “we’re in all those platforms.” If readers discover The Washington Post content there, they may wish to read it in its native environment.

“The bet we’re making is that there’s a substantial audience that cares about quality journalism, and added:

“The Washington Post, year to date, has grown more digital audience…than any news or information site on the Web.”

The jury is still out on whether the next generation of media consumers will embrace the kind of reporting honed by industry stalwarts like The New York Times, The Washington Post, The Guardian and The Boston Globe, but it’s clear these news orgs will not go down without a digital fight nor a diminishment of their commitment to producing quality, well-vetted journalism.