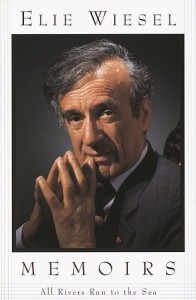 Given the unprecedented amount of news and opinion coverage the once-presumed autobiography A Million Little Pieces has garnered these last couple of weeks, there’s little I can add by jumping in to the frey. However, Elie Wiesel, the Nobel Prize-winning, Holocaust-surviving, Oprah-selected author and statesman today is likely hoping that he too can avoid becoming a part of that discourse.

The Times reports this morning that a new translation of Mr. Wiesel’s harrowing Holocaust memoir Night allowed the author “to correct and revise a number of important details.” To her credit, and certainly in heightened recognition of the implications these factual changes might have, the book’s translator, Mr. Wiesel’s wife, agreed to be interviewed to shed more light on Night. One of the changes: the author’s age at the time he entered Auschwitz — from “almost 15” to “15.”

It remains to be seen whether Mr. Wiesel will be subjected to the same level of criticism and scrutiny as Mr. Frey (and Ms. Winfrey). To his credit, coming clean right away to reveal the “insignificant” changes in the new edition should help. It contrasts considerably with the equivocation that ensued following the first revelations about the veracity of A Million Little Pieces.