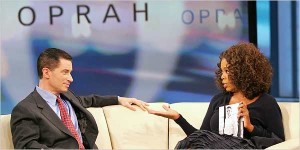 Boy, is Jim McGreevey taking it on the chin. The former married Governor of New Jersey had a fab opportunity to promote his new book (and himself) with an appearance on the premier book-propelling program, “Oprah.”

Now I’m not one to know first-hand the social or political orientation of the typical Oprah audience, but I can guess that they wouldn’t take too kindly to the notion of a husband’s mano y mano tryst as his wife lay in a hospital bed after the birth of his child. As the Post’s always irritable Andrea Peyser summed it up: he’s a “whore.”

“I’ve been told that audience members, though sworn to secrecy, were visibly appalled by this grotesque airing of too much information.”

Maybe in choosing Ms. Winfrey, Mr. McGreevey’s publicist reasoned that “Brokeback Mountain’s” popularity among women would prevail here, or maybe Mr. McGreevey just spoke too extemporaneously. In either case, what was meant to be a book about honesty and redemption may now be irrevocably tainted by a less-than-flattering reception.

But, again, maybe a little controversy and buzz — even bad buzz — will accrue to book sales. Isn’t this the publisher’s overriding goal? (Who slipped an advance of the book to The AP anyway?) It’s another example of a publisher looking out for its commercial interests at the expense of the reputation of the publication’s subject. Right, Tom?