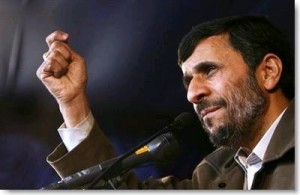 And then we have Gov. Palin’s take on one of the most dangerous despots on the planet, Mahmoud Ahmadinejad:

“I believe that under the leadership of Ahmadinejad, nucular weapons in the hands of his government are extremely dangerous to everyone on this globe, yes. We have got to make sure these weapons of mass destruction, that nucular weapons are not given to those hands of Ahmadinejad, not that he would use them, but that he would allow terrorists to be able to use them. So we have got to put the pressure on Iran.”

“Palin recited her answers as if reading from a Teleprompter inside her head. The extensive coaching she has received could not save her from embarrassment in this exchange.”

Didn’t a gaggle of Republican PR operatives descend on Alaska to prep Palin for her first, and I still believe controlled media interview? I say controlled since I didn’t hear a single question about her parental failings, which I believe are quite relevant to her potential fitness as our nation’s VP.

Every so often, we are charged with “media training” potential spokespersons from scientists to professors to corporate executives. We run through messaging and interview techniques with the goal of advancing their communications agenda. (After all, why do interview if only to advance the reporter’s agenda?) We conclude by conducting a series of interview simulations followed by critique to address shortcomings and reinforce good behaviors.

Most importantly, when we’re finished, we let our client know whether his or her prospective spokesperson is ready for prime time. Just as Senator McCain jumped the gun in selecting Gov. Palin as his running mate, his PR consiglieres may have jumped the gun in setting up this national interview. In fact, I wonder if she will has the smarts to ever be ready. As Shafer points out:

“Palin can’t blame her muddled responses on Gibson, who treats her fairly and conducts himself professionally. Never mind about her not being ready to be president. She wasn’t even ready for this interview.“

Maybe, she should have borrowed a trick deployed by another dumb ass politician on his road to the White House?

The Week posted a good round-up of Friday morning quarterbacks.