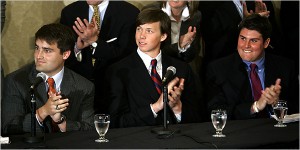 “This entire experience has opened my eyes up to a tragic world of injustice,” he said. “If police officers and a district attorney can systematically railroad us with absolutely no evidence whatsoever, I can’t imagine what they would do to people [who] do not have the resources to defend themselves.”

— Former Duke lacrosse player Reade Seligmann (pictured on right) in response to the news that he and his two teammates were cleared of all charges.

“What price do you put on your reputation?â€ Mr. Capus said. â€œAnd the reputation of the news division means more to me than advertising dollars. Because if you lose your reputation, you lose everything.â€