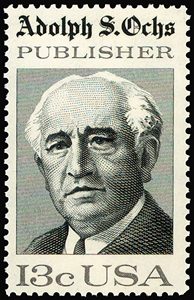 Can you really blame them? Fortune (and former NY Post) scribe Tim Arango reports the news, which others have picked up , that the Sulzberger-Ochs family is pulling the majority of its investments held at Morgan Stanley.

The purported reason: the crusade by one of the investment firm’s fund managers in London to pressure the family that controls The New York Times Co. to eliminate its two classes of stock and separate the editor and publisher positions, now held by Arthur Sulzberger Jr.

In my opinion, as a regular Times reader and a sometimes Times PR advisor, the Ochs-Sulzberger ownership of the world’s most-influential news organization is simply good for you, me and the nation. Just consider the Tribune Company’s decision to can L.A. Times editor Dean Baquet for defying the corporate bean counters by refusing to decimate his newsroom — and the quality of its daily report. The New York Times just named Mr. Baquet as its Washington Bureau chief.

I am not insinuating that Times management is fiduciarily irresponsible. Certainly, all longstanding, traditional media properties are facing unprecedented challenges. (Consider the $814 million write-down of NYTCO’s New England Media Group.)

Morgan Stanley CEO John Mack is said to have privately wished his analyst had never begun his crusade. That story line will likely remain muted given the banking conflicts that surfaced in the dot-com era. Think: Mary Meeker, Henry Blodget and Frank Quattrone.

With private equity firms, former PR executives, and Hollywood types clamoring for the cache of media ownership, it’s reassuring to know that Adolph S. Ochs’s legacy is being staunchly defended by his journalism-bred descendants. I don’t blame Arthur for one second for reportedly pulling his family’s assets from Morgan Stanley.