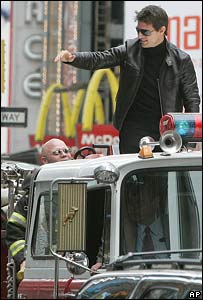 “Lindsay Lohan crystallizes a question now haunting so many movie stars: how much does the off-screen image bleed into, and possibly hurt, the reception of the work?”

Her piece follows by a day an AP interview with Rob Moore, Paramount’s head of worldwide marketing and distribution, wherein the reporter extracted the following quote on how Tom Cruise’s off-screen, off-beat antics affected the first weekend’s box office receipts for “Mission Impossible 3,”

Hollywood Reporter attributes the relatively soft-showing of the film less on Mr. Cruise’s antics and more on the film’s early release and the softness in the theatrical film box office in general.

I’m not an expert, but I sense Mr. Cruise’s hyperbolic promo day in New York, and his general bizarro public behavior had something to do with the soft opening. (A fickle public, no doubt.) The good news: these events can actually be managed through thoughtful and assertive PR counsel. The bad news: many A-listers rarely adhere to such advice. “Lindsay, please be home for your 12:00 curfew!”