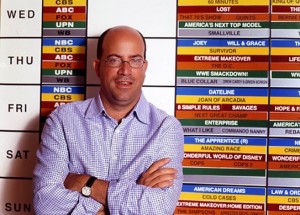 I think living in La La Land has finally gotten to NBC News & Entertainment prexy Jeff Zucker. It was he who granted “The West Wing” permission to allow the NBC News bug (that little translucent icon in the lower right of your screen) to be displayed during the fictional debate between actors Alan Alda and Jimmy Smits. Add real-life TV journalist Forrest Sawyer as moderator, and the blur begins. I guess this is what qualifies as synergy at the Peacock network. To me, it’s an ominous breach of church & state that diminishes the esteem of the news division.

The Washington Post’s Tom Shales had this to say: “This is a small sign of how standards at the news division have deteriorated over the years, and an indication that maintaining the line between news and entertainment is no longer much of a priority — at NBC or, for that matter, at CBS or ABC.” Ironically, CBS-TV News’ “Public Eye” blog chimed in.

America has reluctantly come to accept the barrage of blatant commercial endorsements and less-than-subtle product placements in entertainment programming (just think of ABC’s “Extreme Makeover: Home Edition” as one giant commercial for Sears). But it’s quite another to exploit a trusted news organization so that a TV episode can appear more realistic. At least Jon Stewart is up front about his absurdist approach to his daily “news” show.