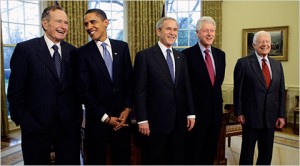 Years ago, choosing which tie to wear on the public stage was a much easier proposition. I remember repping T. Boone Pickens during his fame-making run at Gulf Oil. It pre-dated the age of CEO-as-media-celebrity, and in fact, may have ushered it in.

In addition to working on media messaging and delivery, I remember being called to his Waldorf Towers (or was it Helmsley?) suite at the crack of dawn on the day of his tÃªte Ã  tÃªte with Diane Sawyer of CBS “Morning News.” (The caricature of a big Texas oilman standing up for shareholder rights apparently struck a resonant chord with the show’s bookers.)
The big decision in his suite that morning revolved around what tie Boone should wear. I made my suggestion based on nothing but my own personal taste. His wife concurred, and we were off to West 57th Street for a veritable love fest. Boone’s a natural, if you didn’t know.
Today, the choice of which tie a newsmaker chooses to wear seems to come with much more symbolic baggage. Am I the only one who found the choice of cravates from yesterday’s boffo Presidential photo-op more than a little curious?
Let’s see. Two Bushes in Blue. Carter and Clinton in Red. Obama in Blue.

I’ll tell you one thing: I did derive some satisfaction to see Obama creped in true blue. But then again, maybe I’m reading too much into this??? Or maybe not.