“Since 2006, one out of every 17 novels bought in the United States was written by James Patterson. He is listed in the latest edition of “Guinness World Records,” published last fall, as the author with the most New York Times best-sellers, 45, but that number is already out of date: he now has 51, 35 of which went to No. 1.”

These are remarkable stats from this Sunday’s New York Times Magazine profile of the most prolific and successful novelists writing today. Reporter Jonathan Mahler relayed his experience sitting in…

“…on one of Patterson’s regular meetings with Little, Brown to discuss the marketing and publicity for his coming titles. The meeting was held not, as you might expect, at the publisherâ€™s offices in Midtown Manhattan but in the living room of Patterson’s Palm Beach home, a canary yellow Spanish-style house on a small island in Lake Worth.”

I did in fact meet James Patterson in his office, but well before his name was synonymous with the beach-reading crowd and well before he lived on a “canary yellow Spanish-style home on a small island in Lake Worth.” Don’t get me wrong. He was hugely successful at the time and quite well-known in his chosen profession — just not as a novelist. I found him to be an affable, yet no-nonsense kind of guy.

It was the early or mid-eighties and Mr. Patterson served as chairman of J. Walter Thompson, the venerable advertising agency straight out of “Mad Men.” At the time, I was the go-to “back-of-the-book” media relations guy at JWT’s sibling PR agency Hill and Knowlton.

I remember being summoned from my cubicle to a meeting in Mr. Patterson’s office in the Graybar Building. (So which JWT client had its ass in a sling today? I wondered.) It didn’t take long before I learned the real reason for my visit. Jim’s new (2nd?) novel was poised to come out and he was thus far non-plussed by the publicity effort. (Who even knew he was novelist?) Apparently, the previous PR guy incurred his wrath and was shit-canned off the project. 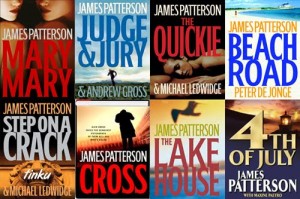 We talked for a while during which time I nervously probed him on the book and what he felt was unusual or newsworthy. Out of the blue, he let on that he named all of its characters after his current and former advertising clients. Huh? He proceeded to rattle off the characters’ names and their real-life positions.

I loved this, and crafted a note for Richard Johnson, the then newbie editor of the New York Post‘s “Page Six.” The item ran a few days later virtually unchanged.

Mr. Patterson was elated, not because he made New York’s most influential gossip column, nor even that book sales perked, but rather because his mother called to say that she saw the item in her hometown newspaper. I guess I earned my keep, though I imagine the author’s threshold for PR success sits much higher today.