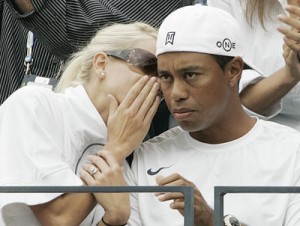 I started three blog posts in the past week, and abandoned them all. I simply couldn’t keep up with the fast-moving conversation.

The first post involved the White House party crashers, and specifically the public pronouncement by the couple’s “publicist,” one Mahogany Jones, whose Twitter handle (@huslinNstiletos), now dismantled, trumps her My Space page.

“We will begin doing press and media next week providing exclusive interviews and press junkets. If you would like to be considered in our media circuit we request that you hold your proposed published profile until then.”

Yes. I’m holding the media cards and if you want access, do as I instruct.

I also liked that The Times used the climbing couple’s Facebook page on its front page as a credible information source.

The second post, also in the immediate aftermath of another boffo “news” event, attempted to parse the Tiger Woods imbroglio. I wrote:

“I suppose the question is not whether Tiger and his wife had some sort of domestic dispute — that much is clear, especially if you believe TMZ, which I do. (Remember who broke the Michael Jackson story?) The bigger question, in my mind, is whether a celebrity as revered as this paradigm of paradigms can successfully resist the natural evolution of a classic crisis. Will his personal plea for privacy prevail upon the public? I mean didn’t John Travolta, after the squirrely death of his son, dodge a bullet?”

I soon sidetracked away from this, only to take a mulligan yesterday with an entirely new post that started:

“I’ve been thinking about Tiger. I mean who in our profession hasn’t? The clamor to exploit the travails of one of the world’s most beloved athletes and role models…”

I intended to go on to ponder whether Tiger really needed to satisfy the salacious and insatiable curiosity of today’s media mob. Didn’t he have a reasonable argument when he issued this statement:

“But no matter how intense curiosity about public figures can be, there is an important and deep principle at stake which is the right to some simple, human measure of privacy. I realize there are some who don’t share my view on that. But for me, the virtue of privacy is one that must be protected in matters that are intimate and within one’s own family. Personal sins should not require press releases and problems within a family shouldn’t have to mean public confessions.”

As most of the PR punditry castigate Tiger Woods’s PR consiglieres for not resorting to the standard crisis playbook, e.g., divulge everything quickly, I just had to wonder whether the same rules apply in a victimless and intensely private matter?

Sure, the media, and by extension the public, continues to chomp at the bit for more scurrilous details, but is this a reason for Tiger to provide them? Some in our midst will opine that the media will continue to dog him until he fesses up, and his reputation will suffer commensurately.

Personally, I think he has said enough, and he should now let his game speak for the rest. Time and professional focus will heal the pain.