Since learning (and writing about) the Occupy Wall Street protesters’ pro bono use of a PR firm to ratchet up media coverage of their actions — versus their call-to-actions — I have viewed the movement with a jaundiced eye.

No. I have nothing against the use of PR to help an organization or enterprise advocate a point-of-view. After all, I’ve spent my career doing much of the same. I also am sympathetic to some of the themes that have emerged.

My beef has more to do with the PR peeps’ use of fabricated photo ops that come off as more flash than substance, and the potential ill will it might engender with the media they’re trying to influence. Did anyone bring the giant scissors to the ribbon cutting ceremony?

I remember years ago the sour taste I had after a colleague from our DC office convinced our New York team to create a ruse designed solely for the shooters and reporters at a press event. We had the U.S. Treasurer in town — at Radio City Music Hall no less — on the day the newly redesigned $50 dollar bill went into circulation. 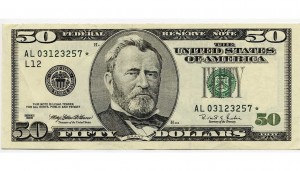 It wasn’t enough for the Treasurer to sit at a table on the street opposite the Music Hall’s $50-emblazoned marquee to sign her name to the new bill for anyone trading in $50 worth of old currency. My politically minded colleague insisted that we create a second photo op whereby Radio City would open its box office specially so that the Treasurer could purchase the first tickets to the Christmas Spectacular. If my memory serves me well, this took place over the summer.

I cringed at the blatant choreography of it all wherein my colleague physically positioned the photographers over here, and the Treasurer over there to create the right effect. If journalists thought PR people were manipulative, it was certainly validated that day. More significantly, the fake ticket purchase surfaced nowhere in the ensuing coverage. 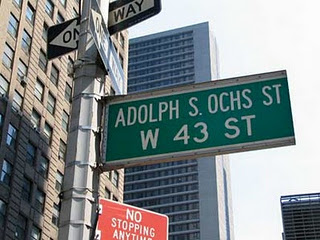 I also remember the event in which we renamed West 43rd Street & Broadway in honor of Adolph S. Ochs on the occasion of the 100th anniversary of the Ochs-Sulzberger family’s ownership of The New York Times. I arrived early to make sure that all was in order and to meet then Mayor Giuliani’s advance person.

His first observation: the actual street sign, which his boss and Arthur Jr. would jointly reveal later that morning, was not squarely facing the media riser we erected acoss the street.

The advance guy insisted on maneuvering the sign so it would face the cameras. I resisted. After all, my client was The New York Times! I’d do it for any other client, but not this one.  I even remember suggesting that “Mr. Ochs would turn over in his grave if he thought we were gaming this photo op.” In the end, the mayor’s guy prevailed out of expediency.

Flash forward to Occupy Wall Street. Today, we’re treated to a photo op that also struck a hollow chord, but one which the AP decided merited movement over its vaunted wire.  It featured a couple of protesters getting fake haircuts while wearing bibs with bank names printed on them.  (See image above.) Geesh.

Maybe this says more about the state of journalism than it does about some enterprising PR firm? In either case, former AP president Lou Boccardi wouldn’t be pleased. And other esteemed journalists are beginning to question the sustainability of the movement, as New York Magazine’s Adam Moss did in his tete-a-tete with Frank Rich today:

“I find it plausible that the rage itself is sustainable â€” but I have a hard time seeing how the Zuccotti Park manifestation of it lasts much longer. It looks too fringe not to eventually be dismissed as fringe. The media will turn against it when it’s no longer convenient to the narrative.”

The only thing that was real in today’s photo op in Zuccotti Park: the protester pictured actually needed a haircut.