Eighteen months ago, Forrester’s Sean Corcoran took a stab at an org chart to illustrate the new interactive marketing paradigm. Specifically, he attempted to further define terms popularized by several digital thought leaders for the types of media campaigns clients have at their disposal to advance their marketing goals, i.e., owned, paid and earned. Here’s how it framed out: 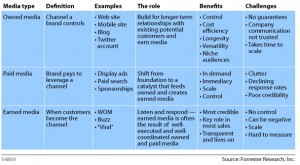 For a recent presentation at a large news organization, I decided to revisit the much buzzed-about Forrester chart to give the communications professionals in the room a sense of this new media paradigm and its practical implications for the PR professional. After all, as much as has changed in our business, our clients still derive value through our ability to build them a positive branded presence in “the media.”

With that said, the media itself has changed through fragmentation, new orders of influence, and time-shifted consumption via myriad channels and devices. More significantly, the means by which we help clients gain that positive branded (increasingly digital) footprint also has evolved. As Mr. Corocoran wrote:

“Ultimately these types of media work best together but making the hard choices of what to include and what not to include is crucial – especially when budgets are tight. But if you simply start by categorizing your media and identifying the right roles based on your objectives, then your on the right path.”

When revisiting the chart, I found it flawed in some respects. Instead of three categories of media, I added a fourth, “shared,” not as a media category in itself, but rather as the desired bi-product of the other three.

In my revisions to the Forrester chart (in red), the description of owned and paid media remain pretty much the same – with Facebook and YouTube added to the mix of owned media.
I diverge from Forrester in how I define earned media, which I view as the art of working with editorial decisionmakers (e.g., the media filter) to secure news, feature, or op-ed page coverage. Sure, “shared” media is in a sense earned media, but it is pretty much out of the hands of the communications manager. It just occurs when one or more of the other three media types are deftly used to capture imaginations. 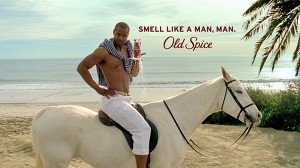 Case in point: the Old Spice “paid” TV commercial was posted on Old Spice’s “owned” YouTube channel from which it could be linked via “earned” and “shared” media. We all know where this ended up.
Many marketers often skip the paid piece altogether and create content explicitly for YouTube, Twitter and Facebook in a play for editorial media attention and consumer sharing.
Nike’s “owned” 3-minute “Write the Future” “ad” for the World Cup was never intended as a paid TV commercial. It went right to YouTube where it set a viral record of 7.8 million views in its first week on the site. Nike also encouraged fans to sign up on its specially created Nike Football page on Facebook. Did the company really even need to issue a news release?
Another noteworthy case is when Google posted to its weblog the news of its new image search function. (Does Google PR even have an account with a paid wire service?) Its “owned” news, plus a couple of Google-produced videos, earned a story by influential consumer tech news outlet Engadget from which it was shared far and wide. See metrics:
Steve Jobs is famous for setting tongues-a-wagging with his periodic public postings. Do you think he really needed to subject himself to the scrutiny of a Walt Mossberg or Michael Arrington to make his point heard? Nah.
Of course, most of us do not represent Apple or Google, which have the capacity (and followings) to unilaterally catalyze conversations. We mortals thus have to rely on delivering more engagingly creative executions, while deftly navigating the new media channels now at our disposal.
Each channel has its own strengths and limitations, but hopefully the right combination, plus a cogent and compelling narrative, can synergistically produce a sharing effect among one’s friends and followers, their friends and followers, and so on and so forth.