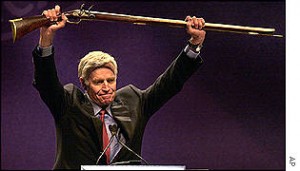 I ran in to Richard Strauss at Bulldog Reporter’s recent Media Relations Conference in New York. Strauss’s DC and NY firm, Strauss Radio Strategies, focuses exclusively on the terrestrial, satellite and digital audio opportunities available to members of the PR profession. He’s a good guy who really knows the space.

For the dedication of the National World War II Memorial, we had retained his firm to capture veterans’ impressions of the prominent new structure on the Mall for feeding back to their hometown radio stations. Over two days, dozens upon dozens of octogenarians generously shared their views with the millions of Americans unable to attend the historic ceremonies.

Mr. Strauss now finds himself in a proverbial political pickle. One of his clients, General Motors, seeking to build public support for its employee buyout plan, had Strauss approach former Labor Secretary Robert Reich for an audio sound bite backing the plan. Apparently, and it’s unclear from the article, a suggestion of an honorarium arose to which Mr. Reich bristled and blew the whistle on his “friend” and fellow Dem.

Here we go again — pay for play. Whether Mr. Strauss intended his “offer” as a quid pro quo is not as relevant to us as the stringent new rules for eliciting third-party support in the media for an issue, product or service. I certainly understand the ethical breach when a journalist crosses the line by accepting payment for delivering positive news coverage. And the same goes for working politicians who nonetheless accept payment in a less overt (though legal) manner.

I just wonder whether this ethical uproar occurred because this is a politically divisive issue, Mr. Reich believes his current role as an academic prohibits such behavior, or we simply find ourselves in an anti-paid spokesperson environment. It seems hypocritical for a national scandal to break out over a four-figure honorarium when politicians accept millions every day in PAC money.

Why no scandal when Charlton Heston is paid to flack for the gun lobby, Brooke Shields for the makers of a post-partum drug, and Catherine Zeta-Jones for T-Mobile, a company that has more than a few dealings with federal legislators and regulators?

Ironically, had Mr. Reich truly believed in GM’s position on the issue, he might very well have agreed to speak out simply for the media exposure a PR firm would have engendered on his behalf. Furthermore, I have learned that GM continues to have Strauss Radio on board to help the company get its point of view across.

Smart, since Strauss is a firm with great integrity, and I don’t believe this story(for which Mr. Reich was never actually interviewed) merited the Times’s attention. What’s wrong with asking Mr. Reich what his fee might be? This is standard operating procedure for soliciting high-profile third-party support for an issue. After all, isn’t Mr. Reich already extremely handsomely compensated on the speaker’s circuit?