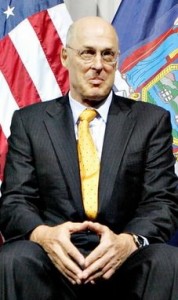 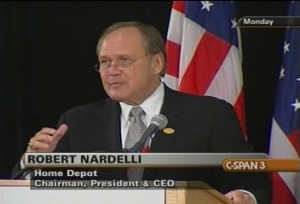 Personally, I would have preferred that he be named to lead the EPA over the U.S. Treasury, but Goldman Sachs chief (and committed environmentalist) Henry Paulson has agreed to replace John Snow as Treasury Secretary. This is an astute move by a beleaguered President when one considers Mr. Paulson’s pristine reputation on Wall Street and beyond.

The incoming Treasury chief’s unwavering and “money-where-your-mouth-is” support for the environment — he chairs the Nature Conservancy — has certainly helped neutralize any criticism that might have flowed from his exceedingly generous pay package. (His net worth is estimated in the half billion dollar range.)

Even without Mr. Paulson’s PSR (Professional Social Responsibility) program on the environment, his success leading one of Wall Street’s gold standard companies will surely silence any of the CEO compensation police. (Let’s now hope that some of his thinking on the fragility of our planet seeps into the administration’s consciousness.)

Robert Nardelli, eat your heart out. With Memorial Day Weekend as a buffer, the Home Depot CEO is likely hoping that his major blunder last week will soon be forgotten. Portrayed as arrogant and uncommunicative with a few not unimportant stakeholders, e.g., his company’s shareholders, Mr. Nardelli and his board thumbed their noses when faced with questions on his pay package and the sub-par performance of the stock.

“This is one of the worst meetings I’ve seen in terms of the arrogance coming from the front table,” Richard Metcalf, corporate affairs director for Laborers International Union of North America, told Reuters on Thursday.

Virtually every major media outlet lined up against him.

What’s unfortunate is that Home Depot’s communications chief made a reasonable argument for Mr. Nardelli’s pay package. Unfortunately, it was buried, save for a letter-to-the-editor in The New York Times. It did not address, however, his and his board’s outright disrespect for company shareholders, which finally surfaced over the weekend in a statement:

“If the board of directors’ absence or the structure of our annual meeting offended any shareholder, that was certainly not our intent,” the statement said.

The company is now playing PR catch up big time. I guess the Web 2.0 value of stakeholder dialogue and engagement has not yet taken hold among the bricks & mortar set down in Atlanta.

“Arrogance will kill you,” said one investor, upset that most directors were absent and that Nardelli allowed no time for questions. “If you aren’t humble and decent, you will destroy this company.”