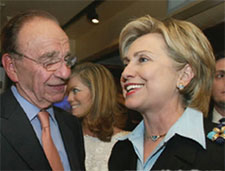 Not that we can expect the New York Post to give any Democratic candidate the benefit of the doubt, but Mr. Murdoch’s Manhattan mouthpiece has gone through extra pains to skewer one particular NY junior senator.

Maybe it was that over-the-top “fashion” spread that first caught my eye during Fashion Week? The art department at the feisty tabloid decided to take Donatella Versace at her word and photo-shopped Sen. Clinton’s likeness into some really tawdry-looking outfits. Think Madonna and Jean-Paul Gaultier. (If anyone has a link to the faux-spread, please share. It’s presently unfindable online.)

Over the weekend, another curiously jaded story leeped off the tabloid’s pages. It had to do with the Clinton campaign seeking an endorsement from an influential African-American state senator, preacher and…PR man in South Carolina. This one had me scratching my head. It turns out that the Clinton campaign retained Sen. Darrell Jackson’s public relations firm to drum up local support.

Apparently Sen. Jackson had been courted by the other Democratic candidates. The Post story insinuated that, in exchange for his firm’s $10,000 monthly retainer, he had thrown his weight behind Mrs. Clinton — something to which the Jackson took particular umbrage:

“‘I’m somewhat offended in the sense that…the national media thinks that an African-American in my position cannot support a candidate without being paid off,’ huffed state Sen. Darrell Jackson, a well-connected lawmaker and pastor whose support is coveted by national campaigns.”

Still, it makes me wonder what Mrs. Clinton’s uber-savvy PR counselors were thinking when they struck this deal.

“Jackson, the pastor of a church with more than 10,000 members, admits his financial marriage with Camp Clinton should have been disclosed before his endorsement of Clinton was revealed Tuesday by a South Carolina colleague.”

Interestingly, these revelations about the senatorial, pastoral PR man emerged in the days leading up to Mrs. Clinton’s visit to South Carolina, and will likely cast a shadow on her agenda there today. Expect more, lots more, of the same supposed scandals leading up to next year’s elections.