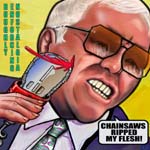 After enduring his share of bad news over the years — from the supremely nasty child custody battle to the sinking fortunes of his once-almight cosmetics giant Revlon, Ron Perelman finally received some good news today…in court. Morgan Stanley, which has enough troubles of its own, was ordered to pay Mr. Perelman $605 million for the sale of his camping goods company Coleman in exchange for equity in Sunbeam, among other things.

Shares of Sunbeam, huh? This is the company “Chainsaw Al” Dunlap decimated, leading to Dunlap’s personal and professional demise. This was a bad man. I remember taking a call from Chainsaw when he was still seen as an honest and fiscally prudent businessman. A colleague had organized an interview for him with CNBC at a studio near his Florida home. The car CNBC sent to collect him was late. He called our firm, and somehow wound up with me. “Where the *#%@ is my car,” he barked! “Find the car or I’ll have you fired!” I had no dealings with him prior to picking up the phone that day.