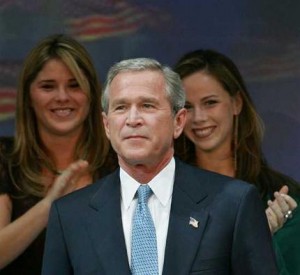 No. I’m not obsessed with the machinations of the Bush Administration’s communications office. After all, it provides ample copy for this weblog. The latest command and control scenario arrived today in a piece by Editor & Publisher NY-based reporter Joe Strupp. It concerns the excessive use of hand-out photos versus images taken by actual photojournalists.

Apparently, in eight years the Clinton Administration issued about 100 canned photos to the media. In just five years, the Bush Administration already has provided more than 500 staged photos. Susan Walsh, an AP staff photographer and head of the White House News Photographers Association had this to say:

“They average about two per week. The White House staff photographer’s role is to document the president. They have now crossed the line and become public relations photographers for the administration.”

In an age where pixels can drive public perception, it’s understandable why the White House Communications Office insists on micromanaging which images merit public release, and which ones don’t. (BTW, Scott McClellan did not return Mr. Strupp’s call seeking comment.)

I guess the brave new world of PR transparency and “naked conversations” has yet to penetrate the Beltway. Why should it when command and control is so effective for advancing agendas?