It was with mixed emotions and frankly somewhat of a shock to hear the news late last week that one of the world’s most well-known and, at one-time, most-esteemed consumer brands was considering filing for bankruptcy. And I was not alone in my surprise.

My first experience with the biggest employer in Rochester, NY came in the mid-eighties at Hill and Knowlton. Kodak was a long-standing client of H&K’s sister ad agency J. Walter Thompson. When JWT PR merged with H&K, we were tasked with booking local in-studio TV talk segments for the company’s “photo experts.” The hook? How to take better pictures, of course. It had multiple hooks throughout the year – holiday, wedding, prom, autumnal, graduation pictures…you name it.

A few years later, we were on board a ship in the night on the East River to celebrate the 100th anniversary of the Brooklyn Bridge. The anniversary coincided with Kodak’s debut of higher-speed film (ISO 200, 400, and 1000). We invited a handful of news magazine photographers aboard to use the ISO 1000-speed film to capture the event’s fireworks display.  And they did –>

The digital drums hadn’t started to beat just yet, but when they did — some 13 years later — I was at Burson-Marsteller noodling over another seminal Kodak product launch.  Like many other technology driven companies, Kodak had a huge conundrum before it: how to innovate without cannabilizing long-standing and lucrative businesses, namely its silver halide film and camera franchises. 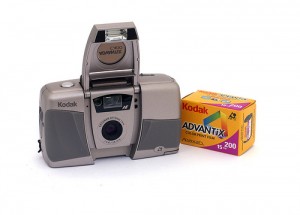 Instead of fully embracing digital, which many in the industry still believed could never match the image resolution of traditional silver halide film, Kodak and other top manufacturers collaborated to prolong the life of film, but with some digital enhancements — something they called the Advanced Photo System (APS).

We were brainstorming the launch of Kodak’s branded APS entry – Advantix film and cameras – and were faced with a farily daunting hurdle:

Even though Kodak R&D did most of the heavy-lifting to develop the simpler, ready-to-use and improved quality advanced photo system, it had made a pact with the four other APS launch partners — Canon, Nikon, Fuji and and Minolta — to hold off announcing any specific products until 2:00pm on February 1, 1996 — 2:00pm TOKYO TIME, mind you, or midnight east coast time!

I remember the brainstorming session vividly since B-M CEO Tom Bell personally sat in. We had two epiphanies: let’s hold a Hollywood-style, globally satellite-fed live launch event at 9:00pm PT in Hollywood! We hired actress Jane Seymour to join Kodak chief George Fisher on stage for the product reveal, which included an oversized Advantix film cartridge descending from the ceiling (an inspiration of B-M’s O.J. Hazard).

Our second idea proved even more effective than the day-of feeding of celeb images and infused video clips from L.A.. It entailed inviting top-tier print journalists, a network morning show, CNN and others to Rochester to get the first EMBARGOED glimpse at Kodak’s take on the Advanced Photo System. (Remember, Kodak’s engineers did much of the heavy-lifting.)

By the time the January 31st L.A. launch rolled around, the media pipeline was already filled with a dozen or so tone-setting, Kodak-owned stories. This strategy was validated when CNN told me a few days before the launch that it had to inform Fuji’s PR reps when they called that its packaged segment was already in the can-ister, so to speak.

The product launch ended up being the most successful in Kodak’s history, generating 1.68 billion media impressions and two million advance orders for Advantix cameras. (I still have the 6″ thick clip book.) Six months later Forbes wrote:

“APS is the product of a unique collaboration by five big camera makers Kodak, Fuji, Canon, Minolta and Nikon to set a common standard. Kodak, however, has 60% of the patents on the camera. So why the collaboration? “We thought the industry could not afford another Beta/VHS battle,” Fisher explains, referring to the war between two rival VCR formats.

Cooperation is paying off. Kodak’s Advantix has 85% of the market in APS film sold in the U.S., versus 70% of the conventional market. This year Kodak will double Advantix capacity, to 5 million cameras. “This is a whole new platform that will give way to new ways of using these hybrid digital film cassettes,” enthuses Fisher.

But, alas, Advantix, which I believe is still sold today, could only forestall the looming digital photography revolution, which Kodak ultimately and wholeheartedly embraced, but couldn’t quite win the day.  Whatever the reasons for the shortcomings, we now await the fate of this proud and important pathbreaking American company.