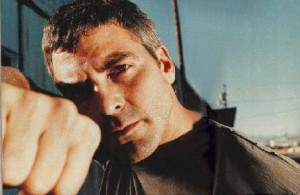 Some of you may have heard about Gawker Stalker, the real-time posting of celebrity sightings in and around town. The New York Post’s inimitable “Page Six” today reports on A-lister George Clooney’s remedy for the stalking and gawking set: flood the popular blog with fictitious sightings.

I love this idea. Apparently the clever ploy arrived yesterday in journalists’ e-mail boxes via Mr. Clooney’s publicist Stan Rosenfield, the quintessential Hollywood PR person. Stan’s also an astute practitioner and genuine nice guy. (I worked with him quite a bit during my early days in the biz as a New York entertainment publicist.)

Mr. Clooney’s privacy notwithstanding, one must admit that the stalker idea also is quite ingenious. Minimally, the pixel proficient paparazzi must be grateful!