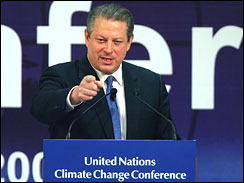 Why should he run for President? The man’s won an Oscar, an Emmy, and a Nobel Peace Prize for goodness sake. What’s more: all came his way without the extreme angst and unrelenting attacks that accompany a Presidential run.

With those auspicious accolades under his belt, Al Gore now plans to shift into high gear to save our planet. Starting in 2008, his Alliance for Climate Protection expects to spend some $100 million per year to “…spur public demand for climate change action.”

While $100 million per year may seem like a drop in the bucket compared to what the auto industry (or Exxon Mobil) spends to preserve the status quo, I’m hoping the very media savvy Mr. Gore strikes the right chord to get the job done. In his words:

“‘The planet doesn’t have a PR agent,’ Gore told the Associated Press last July. But now it will, because the Alliance for Climate Protection is going to use the modern techniques of messaging to get the scientific evidence in front of people all over the world.”

In February, the ACP will launch its “unprecedented media campaign on the scale of the Regan [sic] era ‘Just Say No’ to drugs crusade.” The Martin Agency, known for its Geico and Caveman ads, won the bid in September to handle the three-year, $300 million media blitz. Here’s a peak. And here’s a consumer-generated eco spot from Mr. Gore’s Current.TV.

“The VP saw a gap for mass communication. He saw a need for an unprecedented campaign on global warming,” says Brian Hardwick, director of communications for ACP.

Hopefully no Karen Hughes here (nor her rumored, but thinly PR-credentialed successor).

I’m sure glad Mr. Gore’s behind this, and not dilly-dallying with a Presidential run. After all, if he did decide to run, wouldn’t he have to step down from the boards of Google and Apple? Then where would the campaign financing be? Actually, it appears that the success? of “An Inconvenient Truth” is fueling the forthcoming ACP media blitz, not to mention Mr. Gore’s inherent newsmaking ability.