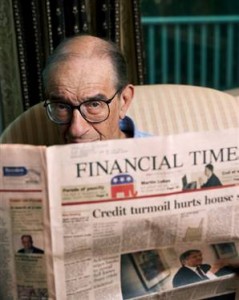 You see, The Journal upset the apple cart by purchasing Alan Greenspan’s new tome and running with a piece on it in spite of the publisher’s meticulously crafted PR/marketing plan that called for the news to hold through the weekend.

I immediately thought about penning a follow-up post to the one I did on the Times’s pre-release release of the Potter news, but was in weekend mode, so I passed.

As my previous post pointed out, why would any news organization, after freely purchasing an embargoed book, agree to honor that artificial embargo, and by so doing, serve as a pawn in the book’s marketing plan anyway? As Motoko explains:

“The task of unveiling a big bookâ€” especially one with great news interest or enormous popular demand â€” has changed dramatically in recent years as players in an increasingly competitive news media seek to be the first to unveil content, and the Internet makes it more difficult to keep books under wraps.”

Still with that competition at a fevered pitch, and the Internet making it oh so easy for a book’s essence to seep out, many formerly willing mainstream outlets are beginning to rethink their traditional agreements:

“‘It takes the wind out of our sails when a reporter gets the book before we go on air, thereâ€™s no doubt about that,’ said Jeff Fager, executive producer of ’60 Minutes.’ He added, ‘Weâ€™re probably going to go into this kind of agreement less often unless the publishers do something different in the way that they distribute the books, making it more difficult for people to get copies of the books before â€˜60 Minutesâ€™ broadcasts.'”

One difference between Dr. Greenspan and Ms. Rowling: the former Fed chief likely didn’t throw a hissy fit when hearing of the newspaper’s breach of his publisher’s PR plan. I suspect this kind of news paled in comparison to his usual fare.