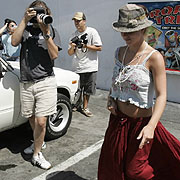 I wouldn’t be surprised if it were Britney’s husband who pulled the trigger on the BB gun that downed a paparazzo staking out the pregnant couple’s baby shower in Malibu. This story typically wouldn’t have amounted to much, but given the notoriety celeb photogs have engendered since Diana’s death, and the intrigue over who’s really guilty here, the story will likely live on in the genre of celebrity justice. I quote the officer on the scene: “Because of the media attention, we’ll probably put this on the front burner…”

Of course, the pop queen disavowed through her publicist any knowledge of the shooting: “Britney didn’t know anything about it. She had nothing to do with it,” her spokeswoman Nicole King said. Isn’t that what Lil’ Kim said?