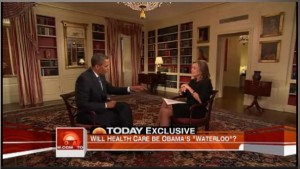 â€œItâ€™s a risk of overexposure,â€ said Joe Trippi, a political consultant. â€œIf you use it all up on health care, you may not be able to use it on something else. But if youâ€™re going to risk using it all up, this is the one to risk it on.â€

Well, here’s something on which both sides of the political spectrum can agree: President Obama’s powers of PR persuasion may be wearing thin given his excessive exposure in the media of late.

Ironically, many journalists who decried Mr. Bush’s lack of accessibility during his eight-year rein, are among those questioning Mr. Obama’s abundant use of the Fourth Estate to advance his communications goals. Is it because they see these appearances as orchestrated versus naturally occurring news events? Damned if you do, damned if you don’t.

This past Monday, the White House Press Office even deployed Mr. Obama to enlist a group of sympatico and influential bloggers to take up the fight on healthcare reform. So what is the right balance? When do you bring to the pulpit your gifted POTUS to press the press and the public with your policies? If not for healthcare reform, then what, as Joe Trippi astutely observes.

This blog has written its share of posts on the downside risk of media overexposure – from Jennifer Aniston to the Twitter boys. Selective, or as some PR peeps are fond of saying, strategic exposure typically allows the newsmaker to prevail in the court of public opinion. But it’s not only choosing the “right” outlets. Taking a measured approach to the number of interviews a sought-after newsmaker grants can ensure longer-term media momentum.

Some even postulate that shunning the media altogether enhances one’s mediability (and bargaining power). Did you see the piece on the media’s desperate efforts to land the first interview with that igno-amorous Governor from South Carolina?

Today’s New York Times, from which the above quotes were culled, examines the conundrum in which the White House Press Office finds itself over how to effectively use this President’s powers of persuasion. Robert Gibbs explains:

â€œYou worry about overexposure maybe very deeply in the back of your mind,â€ Mr. Gibbs said. â€œBut the way the media is structured these days and the fact that it is so segmented and split up means that in order to get something to go through, youâ€™ve got to do multiple platforms.â€

Who else beside the President should be deployed to cogently make the case? Joe Biden? Mr. Gibbs and company should be thinking about its bench, and a full-court press. Progressive bloggers are one thing, credible and persuasive policymakers another. (But please don’t take the retired general route.) Where are the bigwigs at the AMA, AARP…?