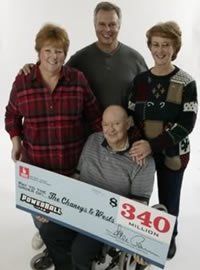 I’m often asked by friends how much a guest gets paid for an appearance on one of the network morning shows. What’s the going rate? They are invariably surprised to learn that the network morning shows do not pay their guests to appear. All three programs are part of their networks’ news divisions, so pay for play would be considered a journalistic breach. (Don’t ask me about “ET,” “Access,” and “Extra.”)

To remain competitive, however, the network morning shows must have some leverage to entice in-demand real (and faux) celebrities to their studios. Often it comes with an offer of multiple appearances, upgraded travel hospitality, and/or clandestine agreements to avoid sensitive subjects, e.g., HSH Prince Albert’s love life, Tom Cruise’s religion, etc. (Though they’d be hard-pressed to admit the latter.)

That scenario played out in yesterday’s “Page Six” of the New York Post. Apparently, the publicist for the $340-million dollar lottery-winning in-laws from Oregon had pitted rivals NBC’s “Today” against ABC’s “GMA” to get the best deal, i.e., theatre tickets, first class flights, limos, etc. First, I ask, what were the Lotto winners doing with their own publicist anyway???

To his credit, when “Today’s” executive producer Jim Bell heard of the demands, he had this to say: “[Bleep] them!” They were booked on “GMA,” forcing an ABC News spokesperson to fess up with a detailed explanation of what the network did…and didn’t do for the newly rich, but still chintzy Oregonians.