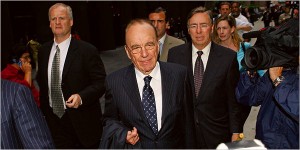 We all know that today it’s imperative to keep track of when (and how) the online conversation drifts to news (or innuendo) about a client’s brand, product and service.

That said, PR people still have their work cut out for them just keeping mainstream journalists in check. If not us, on whom can one rely to ensure that the facts are the facts? The blogosphere? I think not.

One of the biggest challenge we face lies in getting across a client’s counter point-of-view to a thoroughly predisposed reporter, or worse, getting that reporter (or his editor) to publish a correction after an error-laden piece appears. Hint: an article’s tonality, no matter how painful, does not provide a basis for a retraction. Factual inaccuracy, well, that’s another story.

I had the great personal and professional fortune to spend eight years on the PR program that helped bring the National World War II Memorial to fruition in our nation’s capital. The project involved just about every tool in this PR pro’s toolbox.

One of the more frustrating aspects of the campaign involved our work countering the misinformation disseminated by a small, vocal group called “Save the Mall,” which opposed having the Memorial built on the National Mall. Their efforts deprived hundreds of thousands of veterans from ever seeing the Memorial finished.

At one point, we forced a retraction from the local all-news cable station, which ran a preposterous segment purporting that the Memorial’s construction would compromise the aquifer under the Washington Monument causing it to topple. The station took the bait (unchecked) from a Save the Mall press release. Geesh.

Deploying its two veterans (versus our millions), the group succeeded in selling the media a bill of goods. The media swallowed — hook, line and sinker. (Sounds familiar.) Our frustration was such that we even conducted a qualitative analysis of the most influential newspaper’s coverage of the issue. Over 18 months, the news hole of the Washington Post (not its op-ed contributors or columnists) quoted those opposing the Memorial by a margin of three-to-one.

The Post’s Metro reporter refused to budge, so, as a last resort, we thought we’d share the analysis with the Post’s ombudsman. The client ultimately nixed the idea. I wish he hadn’t.

Yesterday’s Public Editor column in The New York Times reminded me of that incident. It looked at the efforts of News Corp’s top corporate communicator to soften the newspaper’s nearly 4000-word profile of his big boss. It was clear that Gary Ginsburg played the primary (if not solitary) role in interfacing between the paper’s reporting staff and the subject the paper so zestfully sought to expose.

What I didn’t expect was the appeal by Mr. Ginsberg, whom I know and respect, to The Times’s “Public Editor” Clark Hoyt after the piece was published, which is usually a last resort. Surprisingly, the ombudsman accepted “the case:”

“Gary L. Ginsberg, executive vice president for corporate affairs at the News Corporation, objected strenuously to the articles. He appealed to me to look into whether ‘the primary motivation for doing such an extensive investigation … was in the end self-serving and commercial.’ Or, as he put it, wasnâ€™t The Times just trying to scuttle Murdochâ€™s acquisition of Dow Jones out of fear that he would make the Journal a much more formidable competitor?”

In the end, Mr. Hoyt assiduously rejected most of Mr. Ginsberg’s assertions, concluding:

“The Times stories were tough but accurate, no tougher in fact than articles in The Journal and in other newspapers and magazines covering a very big business story. But Ginsbergâ€™s complaints are another reminder of how difficult it is for a newspaper to cover a competitor, who can always cry foul.”

Personally, I give Gary credit for keeping the newspaper-of-record on its toes, and for attempting to do so based on his factual analysis of the piece – not innuendo. I hope his bosses appreciate the effort in spite of the outcome.